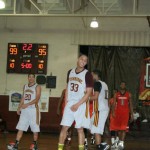 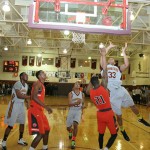 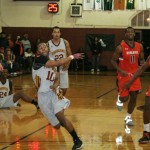 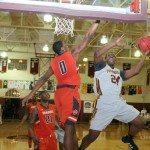 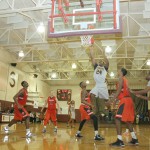 Talley (6’0”, 180, Richmond, Va.), still unsigned, with offers on the table from Longwood and Campbell, among others, was the unquestioned best player on the court full of top Division I prospects. The only thing that slowed him down, and slowed fourth-ranked Fishburne down, was second-half foul trouble. In a 40-second stretch early in the second half, Talley picked up three quick fouls, sending him to the bench at the 14:02 mark with four.

By the time Talley returned at the 7:59 mark, fifth-ranked Hargrave (25-8) was up 82-70, and the night with the theme “Beat Hargrave,” the message emblazoned on T-shirts worn in pregame warmups by the Fishburne (18-4) players, looked to be a lost cause.

“We knew we just had to push, get the ball out in transition, play some defense. We knew the game wasn’t over, though. We’d been down 25 at New Hampton Prep and came back and won. We knew we had to do. Just play our game,” Talley said.

Talley took over from there. Two free throws cut the lead to 90-86 at the 3:36 mark, and Talley followed those up 10 seconds later with a floater in the lane that made the margin two.

Talley then got around the Hargrave defense to find Sheppard for a layup that tied the game at 90 with 2:36 left.

After a Hargrave miss, Talley stopped at the top of the key in transition and drained a three-pointer that gave Fishburne its first lead of the second half, 93-90, with 2:01 to go.

Another pair of free throws by Talley extended the lead to 95-90 with 50.7 seconds left, and Fishburne closed out the game from there by going 6-of-6 at the charity stripe.

“This is a huge win for our program,” Washington said. “We lost to them earlier in the year, so we definitely had this one circled on our schedule. Credit to Hargrave for playing hard. We just didn’t get down on ourselves. We knew we had to keep playing hard, play defense, and execute. We knew we were still in this game.”