Somebody needs to say it, so I’ll just say it. Today’s game with Duke was the kind that UVA would have lost before Bronco Mendenhall. 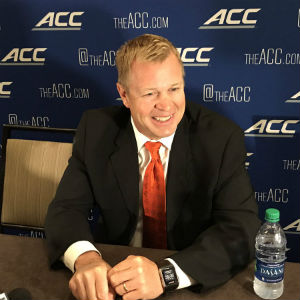 After getting on the board first with an early pick-six by senior safety Quin Blanding, it was a whole lotta ‘nuthin for the Cavs offense, which generated a total of 86 yards of offense and had two first-half turnovers.

But after falling behind 14-7, Virginia was able to put together a 69=yard drive just before halftime to tie the score, and then Mendenhall and his staff made some important adjustments at the break to get the offense back on track.

A pair of scoring drives, 224 yards of offense, a 7-of-11 effort on third downs and utter ball dominance, with UVA possessing the ball for more than 20 minutes in the final two quarters, were key in the 28-21 win.

And so it is that a team picked up finish seventh, and dead last, again in the ACC Coastal improved to 4-1 overall, 1-0 in the ACC, with back-to-back wins over Boise State and Duke.

The wins over Boise State and UConn the week before were blowout wins for Virginia, which hasn’t had a lot of these over, say, the past decade.

The gritty win Saturday may be even more a rarity. For years, dating back to the end of the Al Groh era, and the entirety of Mike London’s time in Charlottesville, it seemed that the guys emblazoned in orange and blue with the sabre regalia were waiting for whatever was going to go wrong whenever it was that the going got tough.

But this group, in Mendenhall’s second year at the helm at UVA, has shed that millstone, in favor of a not-so-quiet confidence.

Even a late hiccup, an unsportsmanlike conduct penalty on Doni Dowling after a 17-yard TD catch that put Virginia up 28-14 with 7:08 to go, that preceded a 76-yard kickoff return by Duke’s Shaun Wilson that set up a quick Blue Devil answer that made it a one-score game less than a minute later, would not bring this team down.

After a UVA punt, the Cavs D forced a Duke three-and-out, then got a Charles Snowden sack on a third-and-six from the Virginia 30 ahead of a fourth-down incompletion on the Blue Devils’ final possession that sealed it.

It wasn’t at all a pretty win. Kurt Benkert threw two interceptions, including a pick-six, and the offense was only able to generate 310 yards on the day.

But the defense was stout, getting its own pick-six, holding Duke to 295 yards, and utterly harassing quarterback Daniel Jones, who was just 14-of=42 passing for 124 yards and sacking him twice.

Blowout wins are nice, but beating a quality opponent with less than your A game might say something more about the character of your team.

“Where it is speaks, that we are building resiliency, we are building maturity, we’re building people, but we’re also building a consistent or capable football program, and it’s starting to show,” Mendenhall said. “Again, I’m framing this, we’re just at the beginning, we’re just starting. But it is showing and I think that’s noticeable to most but from my metrics it’s showing and the mindset on the sideline as I’m watching our players’ body language, there’s just a resolve of, ‘Oh that just happened, next play.” And there aren’t these wild and emotional way ups and way downs. There’s just work to be performed. Then at the end of all the work when the game’s over, then we can kind of look and they get to explode in the locker room, they still are. And that’s fun.”