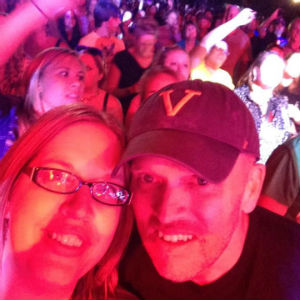 My head is ringing, but that’s me complaining after a helluva night of rock ‘n’ roll at the Rockingham County Fair with Daughtry and the Goo Goo Dolls.

“It’s not going to be that big a deal to me.” My famous last words leaving for the show, me being too cool for school.

I get to hang out with senators, governors, BCS football coaches, WWE superstars, whenever I want to. It’s to a point where I’m past being able to enjoy anything.

But my wife, Crystal, dragged me back into being a fan.

She so much wanted to get backstage to meet one of the headline acts that she had me email Jeff Ishee, the general manager of the Fair, to request a media interview, so she could tag along as my assistant.

When that didn’t work out, Plan B was …

“Seriously, it’s not that big a deal to me.”

Crystal was willing to plunk down money for a backstage pass, and I was content waiting for her to go backstage.

Again, I get to hang out with these kinds of folks all the time. What’s the big deal, getting a handshake and a photo with a rock star?

Then Jeff emails me. He had something for me. Two backstage passes to meet the Goo Goo Dolls.

“Um, Crystal, you’re going to need to sit down. I’ve got some news.”

It was all I could do to keep her attention on breathing thereafter.

We’d already scored second-row, center-stage tickets for the show. Ahem, I should say, Crystal had secured those tickets for us. (Remember, it’s not that big a deal to me.)

So then the moment came.

It was a quick moment. The photo with the Goo Goo Dolls came and went in a flash, but it was cloud nine for Crystal, who by now had starred in a photo shoot with not one, but two, rock ‘n’ roll stars.

Then it was to the concert. Daughtry was why Crystal wanted to be there, and the band was pure rock ‘n’ roll, great show.

Goo Goo Dolls was an afterthought coming in, but their show was … magic. They’re the reason I can’t hear above the ringing in my ears right now.

“That’s an effin’ rock ‘n’ roll band right there,” I said about midway through their set.

Wow is the best I can muster now a couple of hours after the encore.

Second-row, center-stage seats, so close that Crystal picked up not one, but two guitar picks, the first of the 30 that Chris Daughtry threw out to the crowd, and then one of the two or three that John Rzeznik tossed to fans.

I didn’t learn about that second one until after the show.

“You got two?” I asked Crystal, who shook her head to the negative.

“I gave the second one to the girl behind me,” she said, reasoning that she’d already had the one from Daughtry, had the chance to meet the Goo Goo Dolls backstage, and that she didn’t “want to tempt fate.”

Cool thing for me was that the show had me suspending my disbelief for four hours. Sitting that close to the stage, my focus was on the moment, not how many people were there, how the show had been marketed, what the balance sheet looked like.

Daughtry Rzeznik, Robby Takac, they were five feet from me, jamming like hell, and I was transfixed.

Tomorrow I’ll go back to being too cool for school. Tonight I’m basking in the glow of one helluva rock ‘n’ roll show. 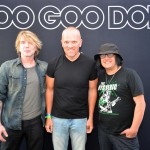 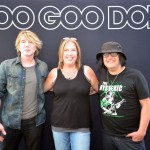