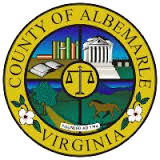 Albemarle County officials joined Crozet residents and business owners at a dedication ceremony for the completion of the Crozet Streetscape project on Thursday.

The celebration began at noon in front of the Mudhouse in The Square. A short walking tour began at the Mudhouse shortly after noon and ended on Crozet Avenue in front of the new Crozet Library where Supervisor Ann Mallek, County Executive Tom Foley, and project team representatives addressed the crowd.

This celebration marks the completion of the final phase of streetscape enhancements. The previous streetscape phases included new storm drainage, sidewalk, pedestrian enhancements, and streetscape improvements from the Three Notch’d Road (Rte 240)/Crozet Avenue intersection to The Square. Additionally, the construction of Library Avenue as well as improvements to the alley between The Square and Library Avenue and the relocation/removal of the overhead utility wires and poles were addressed in previous phases. This last phase of the streetscape construction follows on the heels of the recently completed downtown regional stormwater management facility and new Crozet Library with a more than 50-space parking lot.

The latest streetscape enhancements began in early February, 2014 and were officially kicked off at a groundbreaking ceremony on April 1, 2014. Enhancements were constructed along Crozet Avenue from Tabor Street to The Square. Work done includes 2,000 linear feet of sidewalks, landscaping, pedestrian/street lighting, crosswalks, benches and other street amenities, bio-filters, and bike lanes. Drainage improvements include curbs and a new stormwater drainage system. The total cost for the entire Crozet Streetscape improvement project was approximately $5 Million and was funded in part by a Transportation Enhancement Program grant through the Virginia Department of Transportation. The project was made possible through the generosity of local business and property owners who donated easements for right-of-ways and other improvements.

“The Crozet community is committed to downtown as the focal point and community center of Crozet,” said Supervisor Ann Mallek. “The streetscape project and other downtown enhancements will help foster economic vitality as well as preserve and accentuate the historic character of Downtown Crozet.“

“The streetscape project is a successful example of place-making in our urban areas, something that is very important to the County’s future,” said County Executive Tom Foley. “This project reflects our commitment to the Crozet community and connects all our recent capital investments into a cohesive, attractive, vibrant downtown that embodies the vision and intent of the master plan.”