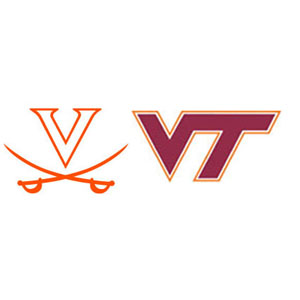 The No. 15-ranked UVA men’s soccer team kicks off ACC play at 8 p.m. Friday when it entertains Virginia Tech in a Commonwealth Clash game at Klöckner Stadium. The match is part of a soccer tripleheader with the Virginia women’s soccer team, which plays host to the Virginia Nike Soccer Classic, including the UVa-Tennessee match at 5:30 p.m.

Tickets/Parking
Tickets are $7 for adults and $5 for youth, seniors and faculty/staff; one ticket is good for admission into all three matches Friday. Group ticket orders of 20 or more tickets are $4. Free parking is available in the University Hall lots.

Virginia-Virginia Tech Series
Virginia and Virginia Tech are battling for the 44th time, with the Cavaliers owning a 36-4-3 advantage in the all-time series. In 2013 the two teams drew 1-1 in Blacksburg, while in 2012 Virginia won an overtime thriller at Klöckner Stadium, 3-2.

UVa is 5-2-3 against Virginia Tech since the Hokies joined the ACC but is unbeaten in its last eight matches against its in-state rivals, although the last four have gone to extra time.

1989 NCAA Champions to Be Honored at Halftime
Celebrating its 25th anniversary, Virginia’s 1989 NCAA championship team – the first in program history – will be honored during a ceremony tonight at halftime. The weekend features a large reunion of former players and coaches, both from the 1989 team and many other Virginia teams. Head coach Bruce Arena, Jeff Agoos and Erik Imler are among the dignitaries returning for the celebration.

Noting the 1989 NCAA Championship Team
• UVa went 21-2-2 and 5-0-1 in the ACC.
• Defeated host Rutgers 3-0 in the NCAA semifinals and played Santa Clara to a 1-1 tie in quadruple overtime in championship game (150 minutes total); the teams were name co-champs.
• John Maessner, Curt Onalfo, Jeff Agoos, Tony Meola and Drew Fallon all were named All-ACC.
• Meola was named the ACC Player of the Year and Bruce Arena was named ACC Coach of the Year.
• Meola won the Missouri Athletic Club Award and the Hermann Trophy; he also was named the NCAA tournament’s Most Valuable Defensive Player.
• Meola and Agoos each were named All-Americans.
• Current UVa head coach George Gelnovatch was in his first season as an assistant coach with the 1989 team.

In the Polls
Following its double-overtime loss last Friday at Tulsa, Virginia dropped to No. 15 in the NSCAA poll. The Cavaliers are No. 9 in the Top Drawer Soccer rankings and No. 10 in the Soccer America poll. Virginia Tech is not ranked.

ACC Play Begins Friday
Friday marks the opening day of ACC play for 2014. For the first time, the ACC will feature a divisional format. UVa joins Duke, North Carolina, Notre Dame, Pitt and Virginia Tech in the Coastal Division. Each team will play every other squad in its division, plus three crossover games (eight total matches).

The two division winners are guaranteed one of the top two seeds for the ACC Championship. The ACC Championship expands to 10 teams this year, with first-round matches featuring the 7 through 10 seeds beginning Wed., Nov. 5.

Cavaliers Go 1-1 at Tulsa Tourney
Virginia split a pair of games at Tulsa’s Hurricane Classic last weekend, falling 1-0 in double overtime to Tulsa before rebounding for a 2-1 win over then-No. 18 uab. Kyle McCord and Sam Hayward each scored second-half goals Sunday as UVa rallied to top uab. Calle Brown made a career-high nine saves Friday in a fantastic performance. Tulsa scored in the 106th minute to pull out the victory.

Noting Virginia Tech
Virginia Tech is 2-2 following a 4-1 home win over Longwood on Tuesday evening. The Hokies were picked to finish fifth in the Coastal Division in the ACC Coaches Poll. Virginia Tech has 18 new players on the roster, including 14 true freshmen.

Up Next
Virginia continues its four-match homestand with a rare Monday contest as the Cavaliers take on VCU at 7 p.m. The Cavaliers return to ACC play on Sunday (Sept. 21) when reigning national champion Notre Dame comes to Klöckner Stadium for a noon match.