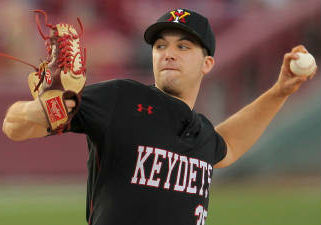 The Southern Conference announced its 10 postgraduate scholarship recipients for the 2017-18 academic year Thursday, and among them was VMI baseball player Brandon Barbery. Barbery was named the recipient of the Dave Hart Scholarship.

A left-handed pitcher and team captain for the Keydets, Barbery was a weekend starter for the first three years of his career, going 5-3 in 2015 en route to earning SoCon All-Freshman honors. So far this season, Barbery has made nine appearances with three starts, collecting a win over No. 15 Virginia on Feb. 20 and earning General Shale SoCon Student-Athlete of the Week honors for his efforts. A biology major with a 3.95 GPA, Barbery’s honors thesis on neurobiology research related to Parkinson’s disease was published in the scientific journal Toxics, and he will attend medical school in the fall.

The president of VMI’s chapter of Beta Beta Beta biology honor society, Barbery is a member of the VMI Institute Honors Program and was inducted into the Phi Eta Sigma freshman honor society. Barbery has also logged hundreds of hours of community service, particularly during his summer spent playing with the Brazos Valley Bombers in College Station, Texas. While with the Bombers, he participated in weekly reading to children, Habitat for Humanity projects and a church rebuilding and cleaning. He also volunteered at numerous baseball camps and local fishing events. Barbery has served as a teaching assistant at VMI, presented at the SoCon Undergraduate Research Forum and held the positions of squad, team and platoon leader as a member of the Army ROTC at VMI.

Barbery and the rest of the honorees will be recognized at the Southern Conference Honors Dinner in Hilton Head Island, S.C., on Tuesday, May 29.

For more information on the other SoCon postgraduate scholarship recipients, please visit SoConSports.com.