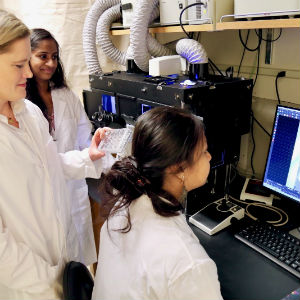 One drop of blood contains 5,000 neutrophils, the most abundant type of white blood cell that is deployed by the human immune system. Throughout the entire body, a human has 25 billion of these foot soldiers that are relentlessly patrolling to fight invading pathogens.

But, sometimes, this cellular army misinterprets signals and becomes confused.

Imagine the widespread damage these soldiers could cause if they stepped out of line and attacked the very organs that our lives depend on. Sadly, this is a reality that 1.7 million Americans face every year. This condition is called sepsis.

Sepsis occurs when the body’s immune system overresponds to an infection. If the condition is not diagnosed early enough, it can lead to organ failure and death. According to the Center for Disease Control and Prevention, sepsis is responsible for the deaths of 270,000 Americans every year – and it is the number one killer in U.S. hospitals.

“It’s like you are having this war inside your body. We want to understand how we can tune the immune cells so that they can fight infections without this huge overreaction that leads to sepsis,” said Caroline Jones, assistant professor in the Department of Biological Sciences in the College of Science.

Jones received a $1.85 million MIRA R35 grant from the National Institute of General Medical Sciences (NIGMS), one of the National Institutes of Health (NIH), to study the factors that underlie the decision-making processes that determine immune cell migration, differentiation, and activation in response to sepsis.

The MIRA grant, which stands for Maximizing Investigators’ Research Award, provides scientists with greater stability and flexibility in their research, which inherently increases the chances for scientists to make huge breakthroughs in the field.

This past March, Jones published a paper in Frontiers in Immunology with Liwu Li, a professor of biological sciences in the College of Science, and Brittany Boribong, a graduate student in genetics, bioinformatics, and computational biology, who was the first author. This work was in part funded by the Dean’s Discovery Fund that was awarded to Jones and Li by the dean of the College of Science, Sally Morton, last year.

Acting as a stepping stone to their current research, the paper showed that the decision-making process of neutrophils becomes faulty when immune cells are exposed to very low levels of inflammation.

Researchers observed that these low levels of inflammation primed the immune system for an excessively violent response to an invader. They also noticed that the cells migrated spontaneously through the microenvironment, instead of heading to the site of infection.

“Sometimes neutrophils get lost when they are exposed to super low levels of inflammation. And you can imagine that a person that is unhealthy, like if they have leaky gut syndrome or an unhealthy diet, would have this low level of inflammation. And then when they get an infection, their immune cells make the wrong decisions, and they respond in the wrong way,” said Jones.

“It’s that secondary hit where they get sepsis. They were predisposed to that earlier on because of the programming of the cells.”

By monitoring inflammation, Jones hopes that this research can help doctors and patients nip sepsis in the bud.

Popular literature has shown that there are certain diets and lifestyle changes that can help patients regulate their inflammation levels. If researchers can find a way to closely monitor cellular functions in a medical setting, patients will be able to see if they are predisposed to not only sepsis, but other inflammatory diseases as well.

“Inflammation can play a role in basically every disease, and controlling your inflammatory levels is highly important,” said Jones.

Using in vitro and in vivo models, Jones and her team will be able to ensure that their research is effective from bench to bedside.

“We will take a reductionist approach with the in vitro microfluidic chip, where we can precisely control certain variables. And then in the in vivo situation, we can then confirm what we are observing and that what we are looking at are the most important factors or variables.”

Jones and her team will begin by taking cells from septic patients. Using a microfluidic chip, they will manipulate the microenvironment to see under what conditions cells can migrate properly and fight pathogens effectively. Although using this method provides researchers with a large amount of data, this doesn’t exactly mirror the processes that are going on inside of a living organism.

To take things to the next level, researchers will implant hydrogels into mouse models to visualize how cells will migrate and fight in a whole organism. These hydrogels will also allow researchers to tune what signals a cell receives.

Most scientists would agree that having too much data is never a bad thing. For Jones, she needs an extra set of hands to make sense of these large data sets and modelling. So, Stanca Ciupe, Lauren Childs, and Matthias Chung, all in Virginia Tech’s Department of Mathematics in the College of Science, will be pitching in to help Jones and her efforts.

“We have to have mathematicians on board to be able to make sense of it. It’s not just yes and no. It gets much more complicated than that. When you are taking patient samples, there are tons of variables and there are a lot of phenotypes that we are looking at.”

Jones is a strong proponent of interdisciplinary research because she is often faced with solving intractable problems, which she calls “big questions,” with sepsis being one of them.

“There are so many complexities, and I really think that you need to take the strengths of all of these different fields and put them together to be able to answer these types of questions.”

If researchers are able to understand the basic mechanisms behind inflammation and sepsis, Jones would next want to explore how sepsis affects brain function.

“It is known with 60 percent of people that survive sepsis develop post-traumatic stress disorder (PTSD). It could be because they went through such a traumatic event, but it is likely also chemical – that they have these huge levels of inflammation that affect their brain.”

In addition to Li’s immunology group and Boribong, Jones is collaborating with Susanti Ie, a specialist in critical care medicine and associate professor in the Department of Internal Medicine at the Virginia Tech Carilion School of Medicine, who will assist with the identification and collection of patient samples for this research.