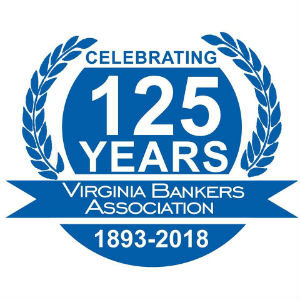 This coming Oct. 11 marks the 125th anniversary of the Virginia Bankers Association.

In 1893, a group of bankers met in Richmond during a time of financial panic for Virginia and the nation. The bankers’ mission was to combine the interests of banks for harmonious action and give assurance that interests dependent upon banking were in safe hands and the deposits of the people were safe. One hundred twenty-five years later, the VBA continues to support the economic growth and prosperity of the Commonwealth by promoting a stable banking system to protect the interests of the customers and communities it serves.

The VBA represents all Virginia state and commercial banks, from the smallest to the largest, and promotes the issues and activities that are of utmost importance to maintaining and strengthening a vibrant banking industry and economy in the Commonwealth.

“The mission of the VBA is to enhance Virginia banking for the benefit of banks, their customers and their communities,” said Scott Harvard, CEO & Director of First Bank, Virginia and the 2018-2019 Chairman of the VBA. “Through the VBA’s work and programming, banks are better prepared to serve their customers and can continue to be the backbone of the communities they serve.”

“I am proud of VBA’s work to recognize and actively support the banking industry’s leading role in the areas of economic education and financial literacy for Virginia students,” said VBA President and CEO Bruce Whitehurst. “Through the VBA Education Foundation, which is supported by Virginia banks, and its programs, we distributed more than $110,000 this year alone. Our VBA Bank Day Scholarship Program has distributed $137,000 in college scholarships to Virginia high school seniors since 2012, and we have contributed $472,000 to the Virginia Council for Economic Education’s Fund for Teaching Excellence since 2009.”

At the time of VBA’s creation, banks serving the Commonwealth had approximately $26 million in total deposits and 149 banks. Today, VBA’s 100 member banks have 8.9 million customers, 2,386 branches and offices, and $307.7 billion in insured deposits.

The Virginia General Assembly passed HJ 450 in March, commending the VBA on this historic milestone. In the resolution, Speaker of the House Kirk Cox (R-Colonial Heights) extended to the VBA the legislature’s “admiration for its legacy of invaluable service to the Commonwealth and its citizens.”

Established in 1893, the Virginia Bankers Association is the unified voice for commercial and savings banks in Virginia. The VBA maintains an active legislative advocacy program, provides training to bankers statewide, and provides a variety of products and service to help its member banks best serve their communities. To learn more about the VBA, click here.