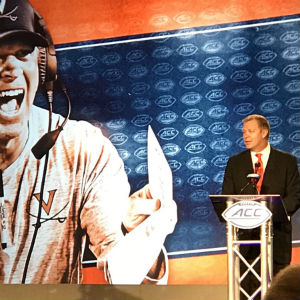 UVA football coach Bronco Mendenhall has been named the 2018 Bobby Ross Coach of the Year, recognizing the top Division I football coach in the Commonwealth of Virginia by the Touchdown Club of Richmond.

He will be honored at the organization’s All-Metro Banquet on Jan. 23, at the Hilton Richmond Hotel & Spa/Short Pump.

This season, Mendenhall directed the Cavaliers to an 8-5 record including a 28-0 victory against South Carolina in the Belk Bowl. It was UVA’s first bowl win since 2005 and marked the first time UVA played in back-to-back bowl games since appearing in four bowl games in a row from 2002-03-04-05.

Picked to finish last in the Atlantic Coast Conference’s Coastal Division in the pre-season media poll, the Cavaliers finished third in the division and their 8-5 record tied as the fourth best among all ACC teams. UVA’s defense ranked third in the ACC in total defense and scoring defense. It was second in pass defense and fourth in stopping the run.

Mendenhall finished his 14th season as a head coach with a career record of 115-65.

The Touchdown Club of Richmond previously honored several UVA players with its player of the year awards. Quarterback Bryce Perkins received the offensive back award, Olamide Zaccheaus was named the top receiver/tight end, Chris Peace was tabbed as the linebacker of the year and Bryce Hall was named the defensive back of the year. Perkins was also honored as the Bill Dudley Award winner, presented to the state’s top Division I collegiate player.