The VMI Keydets brought the go-ahead run to the plate in the ninth, but the George Washington Colonials held on for a dramatic 4-2 victory in the series finale between the clubs Sunday in Arlington, Va.

The George Washington Colonials scored the final seven runs of the game to overcome a four-run deficit and prevail, 8-5, over the VMI Keydets in the middle game of a three-game series contested Saturday in Arlington, Va. The result evened the series at one game apiece.

A dramatic four-run rally with two outs in the ninth inning helped the VMI Keydets push past the George Washington Colonials, 9-7, in the opener of a three-game series Friday in Arlington, Va.

The Old Dominion Monarchs scored 11 runs in the fourth inning and never looked back, on the way to a 19-4 win over the VMI Keydets on a cold, blustery day in Norfolk Wednesday afternoon.

A wild seventh inning turned the tide of a close game and helped the UMass Lowell Riverhawks to an 8-4 victory over the VMI Keydets in non-conference baseball action, contested Friday in Lexington, Va.

Matt Pita ran his hitting streak to 21 straight games in a big way Sunday, going 5 for 6 with two home runs to power the VMI Keydets to an 11-8 win over the Oakland Golden Grizzlies at Gray-Minor Stadium in Lexington. The victory gave VMI a series win, two games to one. 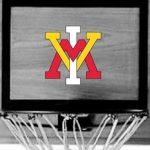 Freshman guard Bubba Parham (Snellville, Ga./Brookwood) has been named 2017-18 Southern Conference Freshman of the Year by the league media. The conference announced its award winners Wednesday from the league office in Spartanburg, South Carolina.

The VMI Keydets have received votes in the latest National Collegiate Baseball Writers Association (NCBWA) top-30 poll, which was released by the organization Monday evening.

The VMI offense continued to roll Sunday, pounding out 11 runs on 14 hits to complete a series sweep of the Lafayette Leopards with an 11-6 win at Gray-Minor Stadium. The Keydets have now won four consecutive games, and are off to their best start since 2014 at 5-2.

Four pitchers held the VMI Keydet offense to two hits as the #19 South Carolina Gamecocks defeated the Keydets, 9-0, in the finale of the series between the clubs Sunday in Columbia, S.C.

The #19 South Carolina Gamecocks jumped out to a 4-0 lead they would not surrender, on the way to a 7-2 victory over the VMI Keydets in baseball action Saturday afternoon in Columbia, S.C.

Looking for some momentum with the league tournament two weeks away, the VMI basketball team held on to defeat rival The Citadel by a 75-71 score Saturday afternoon at McAlister Field House in Charleston, South Carolina.

Senior guard Demetre Rivers scored 21 points on seven of eight shooting from the floor to help lead Mercer to an 82-58 win over VMI in Southern Conference basketball action Thursday night at Hawkins Arena.

Rough second half downs VMI in loss to ETSU

Facing league leader ETSU at home, the VMI basketball team played a strong first half but faltered in the second as the visiting Bucs left Cameron Hall with a 70-56 victory Saturday afternoon in Lexington.

VMI baseball to make 36 appearances on video streaming in 2018

A record number of VMI baseball games will be video streamed this season, according to information released Friday by the athletic communications office.

After dropping the last two conference games the VMI basketball team looked to get back in the win column but fell short in a 72-60 loss to visiting Western Carolina Thursday night at Cameron Hall.

Facing a big test with rival The Citadel coming to town, the VMI basketball team handled the challenge well by defeating the Bulldogs for a fifth straight time at home as the Keydets prevailed, 88-81, Saturday afternoon at Cameron Hall.