Unsung hero: Brandon Waddell has UVA on the brink of national title

Nathan Kirby is the ACC co-pitcher of the year. Nick Howard is the first-round draft pick. Artie Lewicki might be the best all-around pitcher on the UVA staff. But make no mistake about it: Brandon Waddell is its heart and soul.

After a rough start from ace Nathan Kirby in a 9-8 Game 1 loss to Vanderbilt, UVA needed Brandon Waddell to go deep in Game 2 to keep the ‘Hoos hopes for the program’s first national title alive.

Friday night’s UVA-Ole Miss baseball game in the College World Series at TD Ameritrade Park Omaha has been suspended because of inclement weather.

It wasn’t just the preseason #1 ranking. The heralded 2011 UVA baseball signing class has had to carry the weight of expectations for three years.

UVA coach Brian O’Connor had to go to his starting rotation to close out a 7-3 win in Game 2 of the Cavs’ Super Regional series with Maryland on Sunday at Davenport Field.

Three members of the UVA baseball team were selected Friday in the second day of the 2014 Major League Baseball First-Year Player Draft.

Artie Lewicki gave up three hits in seven scoreless innings, and a slumbering UVA offense woke up with a seven-run sixth to break open a close game and push the top-seeded ‘Hoos to a 10-1 win over #4 seed Bucknell on Friday in the opening game of the NCAA Baseball Charlottesville Regional.

Does UVA baseball have enough hitting to get to Omaha?

We’ve already looked at the question of whether #3 national seed UVA baseball has enough pitching to get to the 2014 College World Series. Now to the question that has vexed Virginia fans and ‘Hoos coach Brian O’Connor all season long: is there enough hitting there to get UVA to Omaha?

An eighth-inning Derek Fisher RBI single broke a 2-2 tie to give third-ranked UVA a narrow 3-2 win over North Carolina on Friday night on Day 4 of the 2014 ACC Baseball Championships. 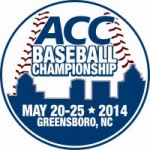 Join AFP in its coverage of the 2014 ACC Baseball Tournament

Your business can be the exclusive sponsor of AugustaFreePress.com coverage of the 2014 ACC Baseball Tournament with a Website takeover package running through Wed., May 28.

AFP is following the top-ranked UVa. baseball team to the 2014 ACC Baseball Tournament at NewBridge Bank Park in Greensboro, N.C.

A literal walkoff bases-loaded walk to Branden Cogswell in the bottom of the 11th pushed across the winning run for top-ranked UVa. in a 4-3 win over Georgia Tech in ACC baseball action on Saturday.

Be the exclusive sponsor of UVa. baseball coverage by AFP

The last thing you want as a college baseball coach heading into an eight-day final-exam break is to go into that break after getting pasted 8-1 on the road. Right? Well, don’t assume that UVa. baseball coach Brian O’Connor is thrilled, but he’s more OK with the ugly loss to Old Dominion Tuesday night than you might think.

#1 UVa. and #4 Florida State needed extra innings in the first game of the weekend series as the Cavaliers take it 5-3 in 10 frames. Derek Fisher delivered the game-winning 2-run double off of Jameis Winston in the 10th inning. Nick Howard struck out the side to secure his 14th save of the season.

Derek Fisher (Jr., Rexmont, Pa.) hit a tiebreaking two-run double with two outs in the 10th inning to lift the No. 1-ranked UVa. baseball team to a 5-3 win at No. 4 Florida State Friday in the opener of a key three-game series at Dick Howser Stadium.

#1 UVa. baseball holds on for 5-4 extra-inning win at VCU

Top-ranked UVa. got home runs from Derek Fisher and Brandon Downes and two RBI from Joe McCarthy to hold off VCU in front of a pro-Virginia crowd on Tuesday at The Diamond in Richmond, 5-4 in 10 innings.

No offense: That’s the problem for UVa. baseball

There are three kinds of lies: lies, damned lies, and statistics. Yes, we reference Mark Twain in pointing out the dirty little secret of UVa. baseball: that it’s winning in spite of the fact that its offense is among the most anemic in the ACC.

UVa. outfielder Joe McCarthy (So., Scranton, Pa.) has been named the ACC Co-Player of the Week, announced Monday by the conference office.

UVa. starting outfielder Derek Fisher (Jr., Rexmont, Pa.) will miss the next four to six weeks because of a broken hamate bone in his right wrist.

The top-ranked Virginia baseball team took both ends of a doubleheader against Monmouth Sunday afternoon at a soggy Davenport Field. The Cavaliers won game one, 5-3, before capturing the nightcap, 6-2, in a game that was called after 5 1Ž2 innings because of rain. With the series sweep, Virginia improved to 9-2 on the season.

Behind six strong innings from starting pitcher Nathan Kirby (So., Midlothian, Va.), the No. 1 -ranked UVa. baseball team defeated Monmouth, 6-3, Saturday afternoon in the first game of a three-game weekend series at Davenport Field. Virginia improved to 7-2 on the year, while Monmouth dropped to 1-3. 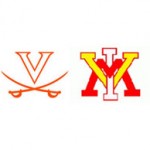 The top-ranked UVa. baseball team managed just six hits in a 3-2 loss to VMI Tuesday afternoon at Davenport Field. Virginia (6-2) had its six-game win streak halted, while VMI (5-2) won its fifth-consecutive contest and snapped a 14-game losing streak in Charlottesville, dating back to March 7, 1991.