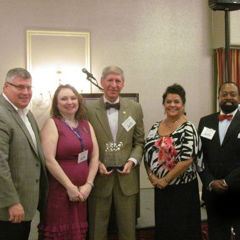 Del. Steve Landes, R-Weyers Cave, Vice Chairman of the House Appropriations Committee, was named Legislator of the Year by the Virginia Retail Merchants Association for his work in the 2016 General Assembly session.

“During this legislative session, Delegate Landes once again demonstrated his commitment to economic development in the Commonwealth,” said Petrina Jones, Director of Government Affairs for the Virginia Retail Merchants Association. “We are especially pleased with the creation of the Virginia International Trade Corporation that will help generate opportunities for small and mid-sized businesses to expand new markets, increase international markets, and create new jobs here in the Commonwealth and his efforts to provide accelerated sales tax relief to more of Virginia’s retailers.

“Del. Landes has been a leader in promoting fiscal responsibility, while advocating for lower taxes and fighting the over burdensome regulations that hamper our small businesses’ potential. We thank Del. Landes for his work on behalf of Virginia retailers and their employees, and we are pleased to recognize him as the Virginia Retail Merchant Association’s 2016 Legislator of the Year.”

“I am grateful for the Virginia Retail Merchant Association’s recognition of my work and the support of the retail industry across the Commonwealth,” said Landes. “I remain committed to economic development and I am pleased with what we accomplished in the General Assembly this session to keep Virginia’s economy moving forward,” noted Landes.

Delegate Landes sponsored House Bill 858, establishing the Virginia International Trade Corporation, which will promote international trade in the Commonwealth by coordinating private and public efforts to stimulate the international trade segment of the state’s economy and marketing products and services. Additionally, as Vice Chairman of the House Appropriations Committee and a House Budget Conferee, he helped pass the biennial budget providing accelerated sales tax relief to more of Virginia’s retailers. The accelerated sales tax threshold will rise from $2.5 M to $10 million in 2017 and to $25 million in 2018.

Landes represents the 25th House District, which includes parts of Albemarle, Augusta, and Rockingham Counties. Landes is currently serving his eleventh term in the Virginia House of Delegates.

The Virginia Retail Merchants Association, a trade association that represents retailers and other businesses, is organized to educate, inform, and serve as a resource for its members. The VRMA supports reasonable and proper laws protecting the interests of its members. Special emphasis is directed towards fostering understanding of retailing, free trade, and free enterprise systems.