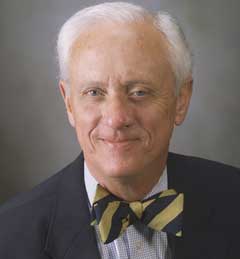 I was one of thousands of students lost in a sea at Virginia Tech. In classes with hundreds of students, I never really found my footing. As time went on, classes got smaller, and you got to know people and professors better.

I was lucky enough to get Sam Riley as my magazine writing professor. I wasn’t really tapped in to the university community, and usually, as a result, didn’t hear which professors were good or bad. Meeting Sam Riley changed everything for me.

He was the bow-tie wearing professor who always came to class with a smile. And stories, he sure had them. He engaged us and was a dynamic force in the classroom. He allowed me to open up about many things in life …. and I wrote about my sister’s suicide in his class.

I bared it all that semester to him – and in turn, to our classroom.

Tonight I learned that my beloved professor died in 2014.

I don’t know how I missed it.

I last spoke to Sam in March 2012. He was putting together a blog to share some of his favorite stories from his magazine writing class and asked to include some of my writings.

He referred to himself in the email as my “ancient j-prof” and signed off saying that he hoped the email found us two (referring to me and my husband Chris who he met in 2011), and “just ducky.”

That was Sam for you. Always upbeat. Always making you smile.

Sam and I kept up over the years. He asked me to serve on a communications board once, which I foolishly declined. I regretted it immediately.

And in 2011, he had my husband and I come and talk to his magazine writing class – the same class I once sat in. Although they were in fancier digs on the other side of campus. I met Sam at his office in Shanks and we walked over to the class together.

My husband and I later joined him and his wife, Becky, at their home. On his many bookshelves in his home office, were column books written by me and my husband. Incredibly touching to see us a small part of his home and life.

After hors d’hoeuves and drinks in his beautiful backyard, he treated us to dinner downtown.

We had gone from a professor/student relationship to friends.

He said to me by email after our trip …. “You two are simply remarkable–absolute dynamos of energy and talent … so nice to see a former student do so very well!”

I emailed him back and offered to treat him to Blackfriars and Zyandoa, if he wanted to make a trip to Staunton some time. I thought he just might take us up on that.

I guess that will never happen. Sam was 74 years old.

Sam lived life to the fullest and found enthusiasm in every day life. I’m not sure he would have changed anything.

He certainly changed me. Many of my fond memories of Virginia Tech are a direct result of Sam and how he impacted me. I am sure the University and the Communications Department still has a huge hole that will never be filled.

Sam was one of a kind. He was one of my kind. I’m incredibly sad knowing that when I go back to Virginia Tech to visit, he’s gone. There are simply no words.