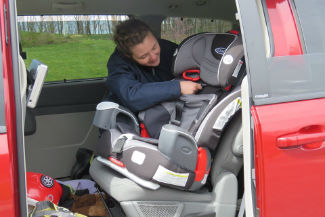 A new law regarding car seats will go into effect on Monday, July 1, across Virginia.

The law, passed in 2018 but not in effect until Monday, will require infants and toddlers to remain rear-facing in their car seats until they reach the age of two or until they exceed the height or weight limit for the car seat, which can be found on the back of the seat. The American Academy of Pediatrics recommends that children remain rear-facing as long as they can, within the parameters of their seat. “While this new car seat law will be a change for many, it is a step in the right direction to better protect young children from serious injuries in crashes,” Harrisonburg Fire Chief Ian Bennett said.

SafeKids estimates that as many as 75 percent of all car seats are improperly installed. The National Highway Traffic Safety Administration estimates that proper use of child seats could reduce infant deaths in car crashes by 71 percent, and deaths of children between the ages of one and four by 54 percent. Yet 31 percent of young kids killed in car crashes had no child seat at all.

The Harrisonburg Fire Department offers free car seat installations as well as car seat assistance programs for those who qualify.

“We understand car seats can be overwhelming and confusing, and our department is here to help you keep your children safe while riding in motor vehicles,” Public Education Officer Lieutenant Erin Stehle added.