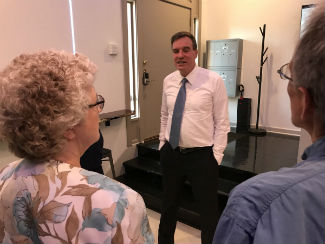 Should President Trump respond to the ongoing investigations into possible criminal activity involving his inner circle by firing special counsel Bob Mueller, “it would be the beginning of the end of the Trump presidency,” U.S. Sen. Mark Warner said Thursday on a visit to Staunton.

“That’s not the way our system works. I think it would be a constitutional crisis,” said Warner, the vice chairman of the Senate Intelligence Committee, which has been conducting its own investigation of Trump, focused on matters surrounding the 2016 presidential election.

In addition to those investigations, the House Intelligence Committee has been conducting its own review, and it appears that there may be others – possibly involving the FBI and the U.S. Attorney’s office in the Southern District of New York.

The senator said he doesn’t “think anybody was shocked by Mr. Giuliani’s comments,” then turned his attention to the latest from the Senate Intelligence Committee investigation, which he said has been an effort to break things down into “bite sizes,” the first and most important to Warner being the election-security piece.

Warner pointed out that “in a normal White House, you would have a White House-led effort on election security, since it touches (the Department of Homeland Security), it touches state and local.”

“But it’s not been a priority (with the Trump White House), even though the head of Homeland Security said, the Russians will be back,” Warner said.

The Senate Intelligence Committee is currently reviewing its own original assessment regarding reports of Russian efforts to interfere into the 2016 election, Warner said, including in that review a look at the response of the Obama administration.

Warner said he is personally anxious to “get to conclusions, but I also know we see witnesses, and it seems inevitably they open up another line of inquiry,” he said.

Senators are also anxious to see how the Mueller investigation proceeds, Warner said.