Jay Huff coming up big, on both ends of the floor, for #9 Virginia

Front Page » Sports » Sports1 » Jay Huff coming up big, on both ends of the floor, for #9 Virginia 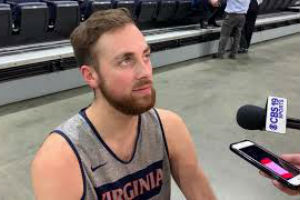 Jay Huff is finally getting the minutes to show what UVA Basketball fans have thought he could offer in terms of production.

Huff had 13 points and six rebounds and blocked five shots to key #9 Virginia’s 60-42 win over Columbia on Saturday.

He was Mr. Do-Everything for the ‘Hoos: scoring on alley-oops, jump-hooks and connecting from three, in addition to delivering elite-level rim protection.

“It’s important this year to have the ability to get some inside-outside action. He blocked some shots and showed both ways that he’s good with his footwork, and we’ll continue to work on that. But he’s continued to add to that by getting stronger, and all of that is starting to show,” coach Tony Bennett told reporters after the game.

The 7’1” redshirt junior is scoring 11.7 points per game and shooting a lights-out 16-of-22 (72.7 percent) from the floor, which has been huge for a team that has been struggling to overcome the losses of De’Andre Hunter, Ty Jerome and Kyle Guy from last year’s national-championship team.

“Part of my job last year was to come in and provide an offensive spark,” Huff said in the postgame. “I was not as always as good of a defender as guys like Jack (Salt) and those guys. So, to have that freedom is really nice, and it’s exciting, and I think with guys like Casey (Morsell) and Kihei (Clark) and everybody that can step out and shoot the three, it’s freeing to kick it out.”

Huff is being generous with that last point. Through three games, Virginia is shooting just 39.8 percent from the floor, and 20 percent from three-point range,

The bigs have also anchored a defensive unit that is giving up an absurd 36.7 points per game, holding opponents to 25 percent shooting and is ranked first in the nation in defensive efficiency, allowing opponents just .792 points per possession, according to KenPom.com.

“We want to just keep making it hard for opponents to score against us,” Bennett said. “I think at times, when we’ve gotten in trouble, we’ve been able to block some shots at the rim, and we’ve been solid for sure, and that’ll have to continue to improve little by little, and with different competitions and different matchups, that’ll continue to increase, but that’ll always be the staple of this team.”

Huff has been a force on the defensive end, averaging 8.3 rebounds per game in 2018-2019, with seven blocked shots and four steals combined in his last two games, the wins over JMU and Columbia.

“Rebounds and blocked shots are big, so I am pretty happy with that,” Huff said. “Points, if they come, they come, but as long as we get the win, it doesn’t really matter to me. Rebounds, that’s my job, that’s Braxton’s job, that’s Mamadi’s job.”