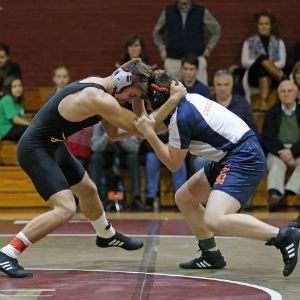 Last year the Caissons went on to a top-10 performance in the state tournament and were the highest finishing DII school in Virginia. The Caissons hope to repeat that performance again this year as well as add some individual state champions for the first time in five years.

Matthew Farrar (Waynesboro, VA) continued his stellar season with an individual conference championship as well as winning the VIC Wrestler of the Year award.

Logan Shiflett (Stuarts Draft, VA) earned a win over a wrestler who beat him earlier in the year and Tristan Difillipo (Florence, NJ) twice had to fight off his back to pick up a win.

“It’s been a rough week but I just asked them to leave it all on the mat,” said Coach Waters. “I’m pretty proud of this group today.”

Fishburne Military School will send nine wrestlers to the state tournament at Woodberry Forest in Orange, VA this Friday and Saturday.