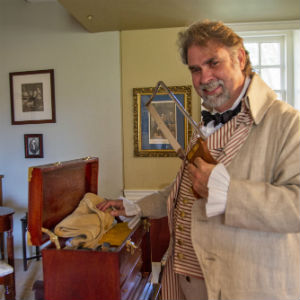 The Waynesboro Public Library will host An Evening with James Craik: George Washington’s Doctor on Thursday, Feb. 28 at 7 p.m. Craik will be portrayed by Tom Plott, interpreter at Mount Vernon. This free program coincides with Every Necessary Care and Attention: George Washington and Medicine, a special exhibit at the library through March 7.

Plott has directed Mount Vernon’s First Person program since 2008, often roaming the estate as Craik who delights visitors with stories of his forty-year friendship with Washington. Craik was not only an army surgeon and physician general of the United States, he was also Washington’s personal doctor and confidant. During the program, Plott will share his box of curious medical instruments and discuss the newest treatments for Revolutionary War soldiers, training to become a doctor, and secrets of the president’s health.

Every Necessary Care and Attention explores Washington’s own health and the ways he tried to safeguard the health and wellness of his family, staff, slaves, and troops. This exhibit was developed and produced by the National Library of Medicine and the National Institutes of Health with Mount Vernon Estate and Gardens.

Librarian Rebecca Lamb says, “In the late 18th century, the practice of medicine was transitioning from a healer craft tradition to a profession. Washington’s story not only showcases these advances, but his good friend Dr. Craik also has the inside scoop on those infamous wooden teeth.”

Craik served with Washington in both the French and Indian War and the Revolutionary War. Post-war, he practiced medicine in Alexandria. On December 13, 1799, Craik was called to treat the former president, who was suffering from a respiratory illness. Washington died the next day, despite the best efforts of his long-time friend and two other physicians.

The Waynesboro Public Library is located at 600 S. Wayne Avenue in Waynesboro. For additional information, call 540-942-6746 or visitwww.WaynesboroPublicLibrary.org.