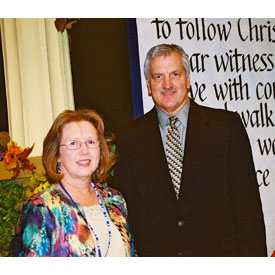 A nurse practitioner and a high school basketball coach were cited Saturday during Homecoming and family weekend at Eastern Mennonite University for their work in exemplifying the highest ideals of their alma mater.

Dwight A. Gingerich, a 1981 EMU graduate from Kalona, Iowa, received the “alumnus of the year” award for 2010. The award is presented annually to a graduate who has been recognized for significant achievements in their profession, community or church.

Nadene S. Brunk, a 1975 EMU alumna now living in Richmond, Va., received the annual “distinguished service” award for her work in starting the Midwives for Haiti (MFH) program (www.midwivesforhaiti.org). This award seeks to honor an alumnus who “demonstrates in notable ways the Christian service and peacemaking emphases of the university.”

Brunk, who was a member of the EMU nursing department faculty, 1990-96, continues to direct the MPH program while also serving as a nurse practitioner-midwife at the Virginia Women’s Center, Mechanicsville, Va.

The primary goal of MFN is to educate and train the women of Haiti in the skills of midwifery and place them in areas of greatest need. Graduates of the program are already embedded into various rural communities. Brunk plans to return to Haiti in November when the third midwife class will graduate.

Brunk got the vision for the MFH program while visiting Haiti with medical doctor and EMU alumnus Kenneth Heatwole of Mechanicsville. The mortality rate of a mother losing a child in childbirth in Haiti is 1:17.

“It was never a question of ‘should’ but rather ‘how’ to develop the program,” Brunk said. “I returned to the U.S., started making contacts with other health care persons and was amazed at their willingness to help.”

Dr. Heatwole, a member of the MFH board of directors and its medical director, says “Nadene models passion, compassion, high motivation and delicate negotiation in everything she does and actively teaches this approach to the Haitian staff and students she relates to.

“Nadene believes strongly in her vision of better health care for the women of Haiti and has pursued it with unbridled gusto,” Heatwole added. “She is obsessed with the success of this project in the most positive sense of the word.”

Gingerich was cited for his “exemplary” service on the faculty of Iowa Mennonite School, Kalona, and more particularly for his work as coach of the boys’ basketball coach there for 28 years. He has compiled a 509-139 won-loss record, has led his team to 10 state tournaments, received sportsmanship awards at five state tournaments, finished first in the state championship (1992) and was named conference coach of the year 12 times.

“I’ve had the pleasure of knowing and working with Dwight for 23 years, and it is a testament to Dwight’s influence and respect among his players/students that many former players have entered the coaching ranks and have chosen to model their on-court behavior after him,” said Larry Swartzendruber, director of development at IMS who nominated Gingerich for the award.

Many people speak appreciatively of Gingerich’s approach to coaching – fundamentals, hard work ethic, respect for one another and working as a team and of the way he “actively cares” for his students. IMS has had many outstanding basketball players over the years, including two at the Division I level.

Gingerich has held many leadership positions at First Mennonite Church of Iowa City, serves on the Iowa Basketball Coaches Association board of directors and is active in Coaches vs. Cancer efforts.