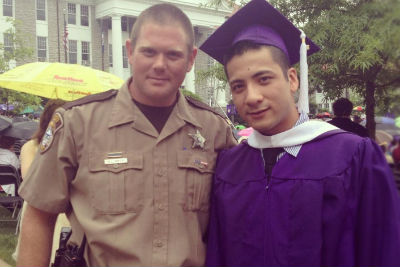 Everything about the Donald Smith video story strikes me as odd, beginning with the obvious, as to, whodunit?

The video, raising issue with the Augusta County sheriff’s friendship with a Harrisonburg man convicted on labor-trafficking and witness-tampering charges, just magically appeared out of nowhere, it seems.

I produce videos for AFP, and I’m also a journalist with an award on the resume for investigative reporting, and I tell you those things to tell you this one: that video wasn’t slapped together by some rando.

It wasn’t a kid with a computer and some spare time. I’ll tell you, I’m already past beginning to doubt that it was anybody with any kind of connection to the campaign of Smith’s opponent, Neil Kester.

No offense to the Kester team, but the level of work in terms of the journalism, the presentation, which was slick, the way the people who produced the video thought down to the detail of using a computer-generated voice, it’s all pretty expert.

Even down to one other detail that I think is worth pointing out: Smith, in his release to the news media late Thursday, noted that a link to the video had been sent to him earlier that day, and he told The News Leader that he suspected the video had inadvertently been made public.

I don’t believe there was anything inadvertent about the video being made public and the link being sent to the sheriff.

The idea that Smith has, that the video was intended as an October surprise, seems to have motivated his decision to go public with the video, to get his side of the story out in the open ahead of time, and on his own terms.

The law of unintended consequences, as it relates to Smith, comes into play here at this point. By getting this out into the public domain now, the opportunity is there for those who would want to do so to hammer home the story that the sheriff is friends with a person convicted of labor trafficking and witness tampering.

And the hammer is coming down already. As I write this column, the video, which Smith posted to the Augusta County Sheriff’s Office Facebook page, because, you know, why not make sure as many people see it as possible, has just under 16,000 views.

Which demonstrates that, yep, there’s massive interest in the underlying story.

Which gets me to this question: would a video on a random YouTube page have 16,000 views and counting without something else at play to serve as amplification?

You know the answer to this: an emphatic hell no.

It had to get out in the public domain somehow.

I can’t imagine that the people responsible for the video and its contents could have dreamed that they would have effectively weaponized the sheriff’s office Facebook page to do their dirty work for them, but here we are.

As I said above, I’m pretty sure the sheriff is thinking, idealistically, hey, I’ll just get out in front of this, be as transparent as possible, and this will all just go away.

This is not going to just go away.