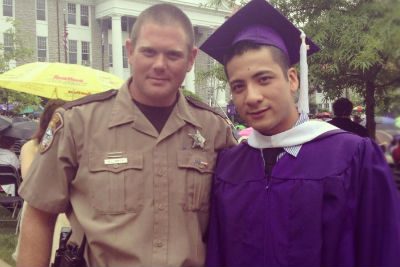 Augusta County Sheriff Donald Smith sent out a media release late Thursday to bring attention to what he is labeling “dirty politics and a smear campaign” being waged against him as he stands for re-election in November.

Smith, elected sheriff in 2015, said he was sent a link Thursday morning to a YouTube video, later hidden from public view, but now made available on the Augusta County Sheriff’s Office Facebook page, linking him to a Harrisonburg man named Felix Chujoy, who was sentenced in 2018 for his role in a labor trafficking scheme involving a Harrisonburg eatery, The Inca’s Secret Shop.

There is no indication at this time as to who is responsible for the video. Smith told The News Leader that he believes the source is people who support his opponent in the November election, Neil Kester, who also ran for the sheriff position in 2015.

Kester had not responded to a request for comment on the video at publication time.

This story will be updated with response from Kester.

Smith wrote on a post on the Sheriff’s Office Facebook page that over the past few weeks he had been told by people that there is “a big announcement that will end the sheriff coming out in October.”

Smith told The News Leader that he believes the video was inadvertently made public Thursday.

The video highlights Smith’s relationship with Chujoy, who, along with his mother, Maria Rosalba Alvarado, the owner of The Inca’s Secret Shop, reached a plea agreement with federal prosecutors on the charges in 2017.

Alvarado pleaded guilty to two felony counts of harboring people who entered the country illegally and two misdemeanors of hiring immigrants not permitted to work in the U.S.

Chujoy pleaded guilty to two counts of aiding and abetting, and was also found guilty by a jury in 2018 on felony counts of witness tampering and obstruction.

Where Smith comes into the story is that he had befriended Chujoy in 2010 after the two met while training at a CrossFit gym in Harrisonburg.

Smith, then a sheriff’s deputy, was working at the time toward a college degree, as was Chujoy, and Smith said the two often studied together, and “over several years, he and I became close friends and often hung out in our off time.”

Smith said he was made aware of the investigation into the labor trafficking charges in December 2014 and met with investigators.

The video makes a case that Smith was not completely forthright in his meetings with investigators, and raises issue with Smith’s decision to allowed Chujoy, after being accused of attempts at witness tampering, to use his mobile phone.

“I never obstructed justice, lied to investigators, or attempted to interfere with the investigation,” Smith said, answering the first contention, related to his meetings with investigators.

And on the use of his phone: “I did allow Felix to make several phone calls from my phone once he was initially released because he didn’t have a phone. Short answer, he asked to use my phone, and I handed it to him. I have no idea who he called or what he said.”

Another contention in the video has to do with letters from Chujoy to Smith that the video narration suggests may have to do with witness tampering, but Smith says were related to requests from Chujoy to pay his bills, with personal information including passwords and security codes.

The video narration suggests that Smith destroyed the letters to keep them from investigators, but Smith said he shredded papers with the passwords and codes to protect Chujoy’s personal information, and that the claims that he had done so to obstruct investigators are “completely false and absolutely not true.”

“I never obstructed justice, lied to investigators, or attempted to interfere with the investigation,” Smith wrote.

Smith went on to relate in the Facebook post that an unnamed opponent in the 2015 sheriff’s race provided details of Smith’s friendship with Chujoy to the local media, and Smith said he met with several reporters to explain the facts of the case, and that reporters who had met with him “determined that I was not involved in the investigation,” and declined to pursue the story.

Full disclosure: Augusta Free Press was not contacted by anyone in 2015 regarding the Smith-Chujoy story, and did not meet with Smith to discuss details of the case.

“Felix was my friend well before this incident took place and before I was the (s)heriff of Augusta County,” Smith wrote on Facebook. “He came to me in his time of need and asked me for help and I did what I felt was the right thing. I could have easily turned my back on him because of my position. However, I have helped countless people in their time of need, and if I had it to do all over again, I would have handled this the exact same way.

“This video was posted on the web as a smear campaign due to this year’s sheriff’s election. It is my understanding, this was to be released closer to the election date to sway voters. As I said, I was never dishonest in any way. Do not fall for dirty politics and this smear campaign.”