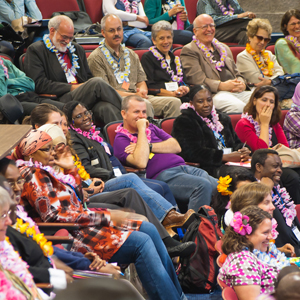 On the week that Bill Goldberg welcomed 67 people from 27 countries to the first session of the 2012 Summer Peacebuilding Institute, he pondered the changes he has seen since his arrival at Eastern Mennonite University 14 years ago.

“Probably 80 percent of the people who sign up for SPI today heard about it by word of mouth from veteran peacebuilders,” he said. “In the 1990s SPI was relatively new and the people coming were pioneers in the then-fledgling field of peacebuilding.”

By the time SPI wraps up on June 15, 2012, Goldberg expects nearly 200 people from 40 countries to have cycled through at least one of its 19 classes on topics ranging from psychosocial trauma to leadership for healthy organizations.

“I still feel inspired when I join the classes at the morning coffee break and see people from Australia, Afghanistan, Fiji and Nigeria chatting together, enjoying each other because they know they are all here for the common cause of peace and justice everywhere.”

Courses at SPI can be taken for either graduate-level credit or simply for training purposes.

At SPI for the first time are 12 fully funded women enrolled in EMU’s newest initiative — the Women’s Peace Leadership Program. This program consists of 20 women grouped in four national cohorts. In this inaugural year of the program, the women are from Liberia, Somalia, Fiji and the Solomon Islands.

“The goal is to develop a mutually supportive cohort of women from a particular region of the world — women who have already shown themselves to be social-change leaders or who have real potential to be,” said Janice Jenner, director of the program. These women will be prepared to be resources for each other when they are working for social change in their home regions.

Like many of the hundreds of students holding master’s degrees in conflict transformation from EMU, Nobel Peace Laureate Leymah Gbowee started at EMU at a session of SPI.

Explaining why she traveled to SPI from the opposite side of the globe, Vosita Lenisaurua of Fiji said that she is a staff member of the Pacific Centre for Peacebuilding, which is modeled on EMU’s Center for Justice and Peacebuilding (CJP). It is led by Koila Costello-Olsson, a 2005 master’s degree graduate from CJP.

“I was able to self-learn much of what I use in my work from books, articles and pamphlets, often published by EMU professors,” Lenisaurua said. “But here I get to listen to people from many other countries and to learn from their work, which is often similar to mine.”

At the Pacific Centre for Peacebuilding, Lenisaurua is the coordinator of restorative justice programs for prisoners and corrections officers. She is also a facilitator of dialogue between parties in conflict.