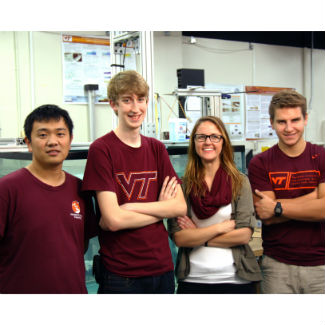 Engineers at Virginia Tech recently tested a wave energy converter inspired by the way squid propel themselves through water during the second round of competition for the U.S. Department of Energy’s Wave Energy Prize, which will eventually award more than $2 million in funding.

The Virginia Tech team is one of 20 which had qualified for the second round and the most recent tests, at a wave basin at the Stevens Institute of Technology, went well, according to Michael Philen, an associate professor of aerospace and ocean engineering in the College of Engineering and a member of the team.

The competition is part of an effort by the Department of Energy to find an effective way to turn the mechanical energy of the ocean’s waves — an immense, but virtually untapped, resource — into clean electricity.

More than half of the U.S. population lives within 50 miles of the coast, in easy reach of the 1,170 terawatt hours per year that the Department of Energy estimates could be harvested from the ocean. Recovering even 5 percent of this amount could power 5 million American homes.

Nevertheless, wave energy development lags behind other renewables. Eric Paterson, the head of the Department of Aerospace and Ocean Engineering, explained that’s partly because wave energy is currently very expensive. “And the reason is because the ocean environment is so harsh,” he said.

The Institute for Critical Technology and Applied Science has provided much of the seed funding for Virginia Tech’s team. It’s an investment that could yield dividends in the form of affordable sustainable energy.

“That’s what the goal is here, is to try to get the cost of energy down by doing something cheap and innovative. And if you do that, then things could really change,” Paterson said.

The team’s energy-harvesting system consists of two bundles of pipes made from polyethylene, connected to either end of an underwater barge deck by flexible tubes that contract when waves jostle the pipes.

The tubes are made from a material called a flexible matrix composite: a stretchy silicone coating surrounds braided fibers that resemble the cellulose fibers in a squid’s mantle.

In the squid, the contracting fibers expel seawater to push the squid forward; in the wave energy converter, they force the water into a high-pressure tank in the barge deck that drives a turbine to generate electricity.

By using inexpensive, durable, and off-the-shelf materials like polyethylene pipe, and flexible matrix composites instead of rigid mechanical components with moving parts, the researchers hope to create a system that will be cost-effective to build and maintain.

“That’s one of the selling points of the concept,” said Xiao. “It’s very robust.”

Philen, whose work focuses on smart structures and materials, has worked extensively with flexible matrix composites, which are also useful in applications like airplane wing design and robotics.

Xiao, an expert in computational fluid dynamics, has been working with Rui Sun, a third-year doctoral student from Anshan, China, on computer simulations to model design questions including the most efficient way to bundle the pipes and how far apart the two bundles should be.

Undergraduate aerospace engineering students in Philen’s lab have done most of the prototype assembly, including Carson Squibb, a junior from Eggleston, Virginia.; Adrian Bialy, a junior from Leesburg, Virginia; and Lorianne Groo, a senior from Taylorsville, Utah. “I call them rock stars,” Philen said.

The current prototype is a 1:50 scale model of the proposed commercial system, which would use PVC pipes a meter in diameter and flexible tubes 40 meters long.

After analysis of last month’s testing, up to ten finalists will receive $125,000 each to develop a larger prototype for testing next summer and fall at a U.S. Navy facility in Carderock, Maryland.

The team whose prototype generates the most power will win the $1.5 million first prize to develop their system further; second- and third-place teams will also receive funding.

The Wave Energy Prize deviates from a traditional funding model that allows researchers to use grant money for early-stage work like prototype development. Instead, the competing teams must independently raise the funds to build and test their prototypes to be eligible to win the prize.