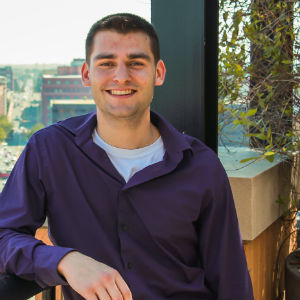 Stephen Quenzer was always intrigued by the idea of living in a “big city.” So right after earning his bachelor’s degree in computer science in May, the Visalia, California native spent the summer on his cross-cultural experience at the Washington Community Scholars’ Center (WCSC).

What he discovered in those 10 weeks as an intern surprised him – and prepared him make the commitment to begin his career in Washington D.C.

“I finished the WCSC program on Friday and started my new job on Monday,” Quenzer said, shortly after an evening commute to his newly rented apartment in the Northwest neighborhood of Petworth. “I thought WCSC would be a great experience of living in a big city for two and a half months. I couldn’t imagine doing it for a long period of time, and I was never expecting to stay.”

Now director of technology at Financial Education and Literacy Associates (FELA), Quenzer manages the outsourced development of the D.C.-based start-up company, which offers personalized online programs that teach consumers how to improve their financial situation.

In an odd twist, Quenzer’s new job isn’t a result of his summer internship with Sojourners, working on the Christian publication’s website. Instead it was the result of networking opportunities provided by WCSC alumnus Joel Murray ‘14 and the program’s former associate director, Sheldon C. Good.

This was the case for Murray, a business administration major who had interned the previous semester with FELA. After graduating in May, Murray accepted full-time employment with the company. He then contacted Quenzer about doing freelance web design and consulting.

“I came in several times throughout the summer and got to know the company better,” Quenzer said. “And it turned out they needed someone with my skills.”

Quenzer had some real concerns, however. “Ninety percent of start-ups fail, so there was a real risk for me to take out an annual lease on an apartment in Washington D.C. without some assurance of financial stability,” he said.

Discussions with Good, who was a friend of the company’s founder, allayed his concerns.

“That was really helpful,” Quenzer said. “The connections I had through WCSC, and the networking opportunities, really helped me make that decision and feel it was a good one.”

Quenzer also feels more comfortable in Washington D.C. than he ever imagined, thanks to the immersive, cross-cultural experience of living in WCSC’s intentional community as an independent, working adult.

“Organizing house jobs, sharing money to buy food, learning how to get along with people from different backgrounds – all of that was a really valuable experience,” Quenzer said. “Some have lived in a city before and some haven’t, and everyone is in a different place in their lives and you have to exist together. You get the total experience of working full-time, taking public transportation, enjoying what the city has to offer. It really gave me an idea of what it would be like.”

“We are proud of Stephen’s accomplishments,” Schmidt said. “He will join many former students who, through the WCSC, have come to the city, found good work, and are now making valuable contributions to our local neighborhoods.”