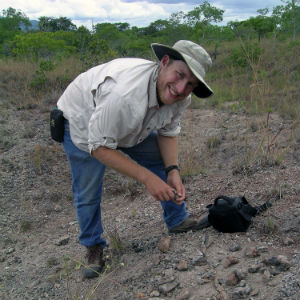 Finding a new species of dinosaur is pretty rare. Getting a hand in the discovery and naming of one – that’s rarer still.

Or it would be for anyone other than 32-year-old Sterling Nesbitt, an assistant professor of geological sciences in the College of Science and the newest addition to Virginia Tech’s paleontology team.

Nesbitt has been responsible for naming more than half a dozen reptiles (including dinosaurs) in his young career.

His latest addition to the paleontological vernacular is Nundasuchus, (noon-dah-suh-kis) a 9-foot-long carnivorous reptile with steak knifelike teeth, bony plates on the back, and legs that lie under the body.

Nundasuchus is not a dinosaur, but one of the large reptiles that lived before dinosaurs took over the world.

The basic meaning of Nundasuchus, is “predator crocodile,” “Nunda” meaning predator in Swahili, and “suchus” a reference to a crocodile in Greek.

“The ‘songeaensis‘ comes from the town, Songea, near where we found the bones,” Nesbitt said. “The reptile itself was heavy-bodied with limbs under its body like a dinosaur, or bird, but with bony plates on its back like a crocodilian.”

The new, albeit ancient, reptile, is featured in a paper in a recent issue of Journal of Vertebrate Paleontology.

“We discovered the partial skeleton in 2007 when I was a graduate student, but it took some years to piece the bones together as they were in thousands of pieces,” Nesbitt said.

Although a large number of skeleton bones were found, most of the skull was not recovered despite three trips to the site and more than 1,000 hours spent painstakingly piecing the bones back together and cleaning them.

Nundasuchus was found in southwestern Tanzania, while Nesbitt and a team of researchers were looking for prehistoric relatives of birds and crocodiles, but not really expecting to find something entirely new.

“There’s such a huge gap in our understanding around the time when the the common ancestor of birds and crocodilians was alive – there isn’t a lot out there in the fossil record from that part of the reptile family tree,” Nesbitt said. “This helps us fill in some gaps in reptile family tree, but we’re still studying it and figuring out the implications.”

The find itself was a bit of a “eureka moment” for the team. Nesbitt said he realized very quickly what he had found.

“Sometimes you know instantly if it’s new and within about 30 seconds of picking up this bone I knew it was a new species,” he said. “I had hoped to find a leg bone to identify it, and I thought, ‘This is exactly why we’re here’ and I looked down and there were bones everywhere. It turns out I was standing on bones that had been weathering out of the rock for hundreds of years – and it was all one individual of a new species.”

Nesbitt says he has been very lucky to put himself in the right position for finding bones, but it also takes a lot of work doing research on what has been found in various locations through previous research; what type of animals were known to inhabit certain areas; and research into the geological maps of areas to determine the most likely places to find fossils.

Nesbitt has been involved in naming 17 different reptiles, dinosaurs, and dinosaur relatives in the last 10 years, including seven of which he discovered.

The College of Science at Virginia Tech gives students a comprehensive foundation in the scientific method. Outstanding faculty members teach courses and conduct research in biological sciences, chemistry, economics, geosciences, mathematics, physics, psychology, and statistics. The college offers programs in cutting-edge areas including, among others, those in energy and the environment, developmental science across the lifespan, infectious diseases, computational science, nanoscience, and neuroscience. The College of Science is dedicated to fostering a research-intensive environment that promotes scientific inquiry and outreach.