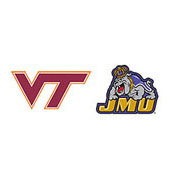 Virginia Tech scored seven runs in the second inning and defeated JMU 11-5 in a non-conference baseball game that was shortened to six innings when a power outage knocked out all of the English Field lights on Tuesday evening.

Madison struck quickly in the first as junior center fielder Kevin Husum (Panama City, Fla./Bay) and second basemanConner Brown (Richmond, Va./Godwin) were hit by pitches surrounding a McFarland single to load the bases. Redshirt senior first baseman Matt Tenaglia (Doylestown, Pa./Central Bucks East) then returned from a 10-day absence with a two-run single the opposite way through the left side to give the visitors an early 2-0 lead with no outs. Gregory lifted a double into the corner in left for a ground rule to score another run and make it 3-0.

Virginia Tech charged back in the second, getting things started with a hit batter and a walk. A bunt attempt to advance the runners went down for a single to load the bases with no outs. Ceballos singled up the middle to score the first two runs with a fielding error allowing both runners to advance. Jenco singled to left to tie the score at 3-3. After a strikeout, Zagunis singled up the middle to chase Gunst and make it 5-3. After a pitching change, Sean Keselica added a sacrifice fly to left to make it 6-3. With two outs, a single to left by Mogg made it 7-3.

In the third, a walk and fielding error set up two on with no outs and a fielder’s choice put runners on the corners with one out.  Sophomore catcher Bobby San Martin (Fairfax, Va./Centreville) lifted a fly to medium-depth center field to score Tenaglia and make it 7-4.

Tech got the run back in the bottom of the frame with a pair of leadoff singles followed by both runners advancing on a balk. Zagunis bounced a grounder to second to plate Ceballos and make it 8-4. Brenden Hayden found the gap for an RBI double to make it 9-4. An infield single by Jenco drove in a run in the fourth to make it 10-4.

In the fifth, Gregory led off with his second double of the game into the corner in left. After a well-struck flyout by San Martin to left center, Johnson singled up the middle to score Gregory and make it 10-5. JMU proceeded to load the bases before a strikeout ended the inning.

VT answered with a two-out rally in the fifth. A pair of singles through the right side set the stage for Mogg’s double down the left field line to make it 11-5. The Hokies had two outs and two runners on after a pair of two-out singles in the sixth when a light outlet to the left of the press box blew and knocked out all of the lights in the stadium.

JMU will be on the road this weekend for a three-game CAA series at Hofstra.