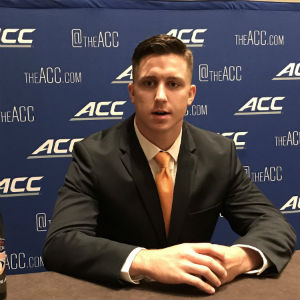 Kurt Benkert, the star of Atlanta’s opening 2019 exhibition game, is on the injured list with a toe injury suffered in that game.

The Falcons placed Benkert, a second-year NFL quarterback and 2018 UVA alum, on injured reserve on Tuesday.

On Wednesday, Benkert had surgery on the injured toe.

He went down to injury in the fourth quarter of the loss.

Benkert spent the 2018 season on the Falcons’ practice squad.

The team had wanted to see a lot from Benkert in exhibition action this summer with an eye to him maybe making the roster as the backup out of camp.

The loss of Benkert for the 2019 season virtually guarantees the backup QB spot to another former ‘Hoo, Matt Schaub, who threw for 172 yards on 12-of-19 passing in Atlanta’s 34-27 loss to Miami Thursday night.

Wideout Olamide Zaccheaus, a 2019 UVA alum, had two catches for 35 yards for the Falcons, and has four catches for 66 yards through two games in the exhibition season.