Five online companies that are making your finances easier

The Internet has completely changed the way that we do everything. Everything from ordering food to buying shoes.

The internet may never be the same after Sept. 30. Big changes are coming that threaten its security, stability and openness.

Few are paying serious attention to Sen. Rand Paul, based on the polls, but he can be compelling when you get to hear him.

Think about how you use the Internet every day. You probably use it to check your emails, and to shop for the upcoming holidays. You use it to pay bills, to look up restaurant reviews, or to book flights. Maybe you use it to connect with friends via social media.

The Internet and related digital technologies have shaped how consumers and companies behave in a number of ways, say marketing scholars in Virginia Tech’s Pamplin College of Business. 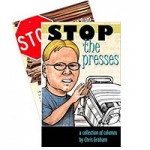 Stop the Presses: Get off my damn lawn!

A free and open Internet for an innovative and competitive economy

If you’re reading this online, thank net neutrality. Net neutrality is the principle that all Internet content must be delivered equally.

Study: December most unproductive and distracting month at work

A study of 3,000 people in the USA has found that December is the month when people are most distracted by browsing the internet at work.

The best and worst in transportation in 2014

After an unprecedented 2013 General Assembly Session, when transportation funding in Virginia was reborn after more than two decades, 2014 struggled to compare.

DuPont Community Credit Union will award a $1,000 scholarship to a graduating senior at each of the 19 high schools in the DCCU service area.

Voice Of the People President Steven Kull today announced a partnership with the UVA Center for Survey Research for VOP’s launch of the Citizen Cabinet. CSR will be responsible for managing the recruitment of Citizen Cabinet members in Virginia as well as other parts of the country.

The ongoing drug investigation into an illicit manufacturing operation in Waynesboro has netted another charge for one of the participants.

Returning books to the Augusta County Library just got easier. Thanks to a partnership with Blue Ridge Community College, county library users can now return items to the Houff Library or its book return on the Weyers Cave campus.