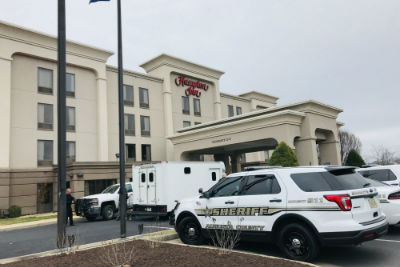 An Alexandria man was taken into custody after a standoff at the Hampton Inn in Fishersville Wednesday.

Joshua Lee Peterman, 33, was the subject of a 1:39 p.m. call from hotel employees who had reported a guest that appeared to be acting irrationally and was harassing staff.

Deputies made contact with Peterman, who retreated into a third floor hotel room and barricaded himself inside the room. Patrol deputies attempted to negotiate a peaceful resolution to the incident.

After several hours of Peterman refusing to cooperate, the Augusta County S.W.A.T. Team and Negotiations Unit responded to assist.

Deputies obtained a search warrant to enter Peterman’s room to facilitate his arrest.

After continued attempts to resolve the incident and negotiate a peaceful resolution proved unfruitful, a small amount of OC spray was introduced into the room. At 4:45 p.m., the room was entered by S.W.A.T., and Peterman was taken into custody.

There were no injuries to Peterman or any of the deputies involved in this incident.

Peterman is currently being held at the Middle River Regional Jail without bond.