Imagine there were a drug that you could take soon after a heart attack that could reduce damage by protecting healthy heart muscle tissue.

“Cardiologists say that when a heart attack occurs, time is muscle,” said Robert Gourdie, director of the Fralin Biomedical Research Institute at VTC Center for Heart and Reparative Medicine Research. 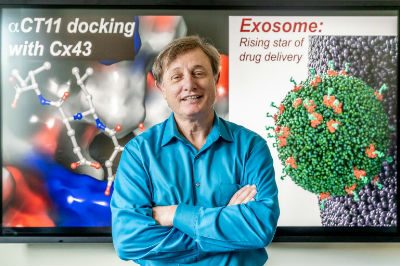 Robert Gourdie, a professor at the Fralin Biomedical Research Institute at VTC, is working on a way to limit the damage of hypoxic ischemic injury, allowing the nearby heart muscle cells to remain intact.

Without oxygen supplied by blood flow, heart cells die — fast. But while a heart attack may only reduce blood and oxygen to an isolated section of heart cells — causing what’s called hypoxic ischemic injury — those dying cells send signals to their neighbors.

“The problem is that the area of dying tissue is not quarantined. Damaged heart cells start to send out signals to otherwise healthy cells, and the injury becomes much bigger,” said Gourdie, who is also the Commonwealth Research Commercialization Fund Eminent Scholar in Heart Regenerative Medicine Research and a professor in the Department of Biomedical Engineering and Mechanics in the Virginia Tech College of Engineering.

Scientists sometimes call this spread of injury signals to nearby healthy tissues a “bystander effect.”

But what if there were a way to keep the injury localized to the group of cells that are directly affected by the hypoxic ischemic injury, while allowing the nearby heart muscle cells to remain intact?

A study published Aug. 19 in the Journal of the American Heart Association reveals that a new molecule developed by a team of researchers led by Gourdie could help preserve heart tissue during — and even after — a heart attack.

Nearly a decade ago Gourdie, in collaboration with a postdoctoral fellow in his lab, Gautam Ghatnekar, stumbled across a promising discovery. Gourdie’s team discovered a compound that targets the activity of channels in cell membranes responsible for controlling key aspects of the bystander effect.

But the compound, called alphaCT1, also had other unexpected and beneficial effects, particularly in relation to skin wound healing.

Meanwhile, Gourdie has been trying to understand how the drug works on a molecular level, which led to the study just published in the Journal of the American Heart Association.

“This paper asks the question: how does this peptide drug actually work?” said Gourdie.

“AlphaCT11 seems to be even more effective than the original peptide in protecting hearts from ischemic injury similar to those occurring during a heart attack,” said Gourdie.

The study reveals that alphaCT11 gives a robust injury-reducing effect, even when given 20 minutes after the loss of blood flow that causes ischemic injury. When put to the same test, the parent peptide did not appear to provide a heart-protective effect when administered after ischemic injury.

“AlphaCT11 could provide the basis for a new way to treat heart attacks and prevent the spread of damage that occurs immediately after a heart attack,” said Gourdie.

The researchers perfused isolated laboratory mouse hearts, keeping the organ alive and beating for a number of hours. Ongoing studies, through collaboration with Virginia Commonwealth University’s Antonio Abbate and Stefano Toldo, will examine how alphaCT11 performs in live mice.

The lead co-authors, Jingbo Jiang, a pediatric cardiologist at Shenzhen Children’s Hospital in China who did her doctoral work at Virginia Tech, and Daniel Hoagland, a postdoctoral research associate, both worked in Gourdie’s lab on the study.

Other research contributors included Joseph Palatinus, a cardiology fellow at Cedars-Sinai who did his doctoral research in Gourdie’s lab; Jane Jourdan, lab manager at the Center for Heart and Reparative Medicine Research; Geert Bultynck and Jegan Iyyathurai, who work at KU Leuven; Zhiwei Zhang, of the Guangdong Cardiovascular Institute; Zhen Wang and Kevin Shey, who work at Vanderbilt University; Ryan King, a translational biology, medicine, and health graduate student at Virginia Tech; Steven Poelzing, an associate professor at the Fralin Biomedical Research Institute; and Huamei He and Francis McGowan, who work at the Children’s Hospital of Philadelphia.