Scott Wachenheim: Pieces in place for VMI football in 2019 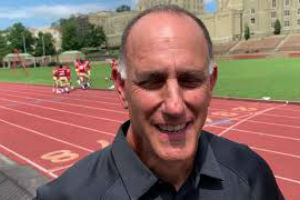 VMI football coach Scott Wachenheim has thrown down the gauntlet to his team: it’s win time in one-nine.

With 16 returning starters, the Keydets have confidence, internally, that they can turn things around in 2019.

The writers and broadcasters who cover SoCon football don’t necessarily agree, picking VMI ninth in the nine-team conference, arguably the toughest, top to bottom, in FCS, with two teams (Wofford at #9, Furman at #19) in the STATS Preseason Top 25, and ETSU left just on the outside looking in, the top vote-getter among those not in the national rankings.

Oh, and then, Chattanooga, Mercer and Samford also received votes.

Yeah, that adds up to six teams of the nine.

It’s a tough league to do a rebuild, is what we’re saying here.

“At VMI, we don’t do ordinary, so it’s great to be in the SoCon,” said Wachenheim, an Air Force alum whose coaching stops have included the NFL (Washington Redskins) and several jobs in the Power 5 (Arkansas, Colorado, UVA).

His teams at VMI have gone a combined 6-38 in four seasons, but the pieces seem to be in place heading into Year 5.

Wachenheim has record-setting quarterback Reece Udinski, the first QB in school history to pass for more than 3,000 yards in a season, back for a second year in the Air Raid offense installed by offensive coordinator Brian Sheppard last year.

The defense has nine starters back, and experience in the two-deep.

“We’ve got experienced guys who know what we’re doing,” Wachenheim said. “Last year, we kind of had to keep it simple for those young guys to know what to do. I think there’s increased confidence from those guys because they’re making plays in practice, and it’s exciting to see.”

The media folks aren’t expecting much out of VMI in 2019.

Wachenheim, his staff, his players, are ready to prove them wrong.