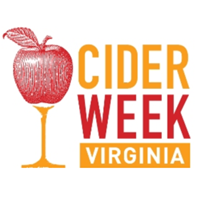 In 2012, Virginia became the first state in the country to have an officially proclaimed “Cider Week,” designating the full week before Thanksgiving as Virginia Cider Week. This year, Virginia Cider Week runs from November 15–24 and will highlight the more than two-dozen Virginia cideries and their positive impact on Virginia agriculture.

In January, Northam announced that Potter’s Craft Cider would invest $1.56 million to expand and relocate their hard cider production facility from Free Union to historic Neve Hall, a former Episcopalian church and school located south of Charlottesville on Route 29. The complex was built in 1924 to serve poor families in Albemarle County’s Ragged Mountains area. Through this project, Potter’s Craft Cider is creating 12 new jobs, committing to purchase an additional 6 million pounds of apples from Virginia orchards over the next three years, and preserving the buildings and restoring the grounds to create a unique new cider production facility, gardens, and tasting room.

“I can think of no better way to kick off Virginia Cider Week than by celebrating the continued growth and success of one of our most established and innovative cider producers,” said Northam. “Businesses like Potter’s Craft Cider are quickly making cider a core component of Virginia’s ripening craft beverage industry, creating new markets for our apple producers, supporting local farmers, and bringing new economic opportunity to our rural communities.”

In operation in Free Union, just outside of Charlottesville, since 2011, Potter’s Craft Cider is one of Virginia’s oldest producers in the fast-growing hard cider industry. Potter’s Craft Cider sources 100 percent of its apples from Virginia orchards, and produces more than a dozen traditional and inventive cider varieties, all featuring exclusively Virginia-grown apples.

“Virginia is one of the top ten apple-producing states in the country, with the apple industry contributing an estimated $235 million annually to the state’s economy,” said Secretary of Agriculture and Forestry Bettina Ring. “The fastest growing segment in Virginia’s already booming craft beverage industry, hard cider is creating an increasingly important market for our apple growers—especially those producers specializing in heirloom varieties. I congratulate Potter’s Craft Cider on this expansion and commitment to supporting Virginia agriculture.”

“We are incredibly grateful for the support of the community, County, and the Commonwealth which has allowed us to take on this project,” said owners Tim Edmond and Dave Potter. “We have carefully rehabilitated a 100-year-old stone church to serve as our new tasting room. We are excited to have a home to share our love and passion for cider making and to invite the public to explore the property, gardens, and grounds of our new home.”

“Agritourism is a key component of the future of Virginia’s economy, and I applaud Tim and Dan for their entrepreneurial spirit and vision,” said Senator Creigh Deeds. “The relocation and expansion of Potter’s Craft Cider to Neve Hall celebrates the growing hard cider industry while supporting our many apple growers in the Commonwealth. The growth of local businesses like Potter’s is critical to economic success in our rural, farming communities.”

“We’re so excited about the success of Potter’s Craft Cider and their continued involvement in Charlottesville and Albemarle County,” said Delegate David J. Toscano. “They have contributed a lot locally, partnering with The Haven, a day shelter for the homeless, and the arts community at their cider garden in Belmont. Their decision to restore Neve Hall, a former community center and an historic building in its own right, demonstrates their continuing commitment to our community. Supporting locally-grown businesses like Potter’s Craft yields benefits to many more than just the company, and that’s the kind of result we love to see come from development grants.”

“Agribusiness is one of our target industries, as it supports our rural areas,” said Albemarle County Supervisor Liz Palmer. “The Board is proud to support the expansion of a successful homegrown business, as it creates more jobs for Albemarle County and brings this historic structure back into the public realm. The success of Potter’s Craft also contributes to the growth and success of other businesses across Albemarle County—including the apple industry, as a primary input, and the coach services and tour operators that provide safe transport for visitors.”