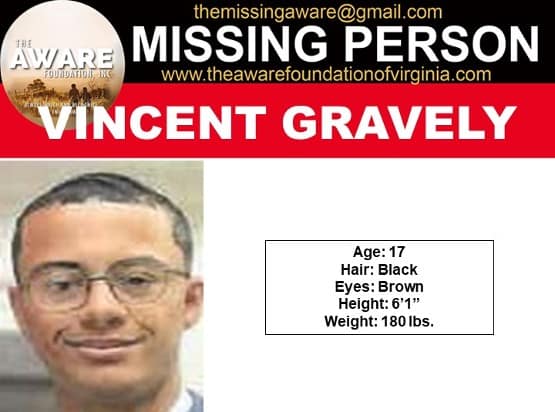 Update: Wednesday, 8:25 a.m. Vincent Gravely has been located and is safe, according to a report from The Aware Foundation.

The Martinsville Police Department is asking for the public’s help in locating a missing 17-year-old.

His family and friends are concerned for his well-being.

If you have any information on Gravely’s whereabouts, contact the Martinsville Police Department at 276-638-8751.

From ideas to start-ups: Entrepreneurs in Virginia invited to pitch business plans

1 Virginia goes back to Shedrick: Is McKneely next to get a push from Bennett?
2 What is the most expensive commercial in Super Bowl history? Ask Alexa
3 DeSantis doesn’t like Trump saying he groomed hot teens with alcohol
4 Business training program looks to fill vacant spaces in village of Lovingston
5 Anxious for payday: Even high-income earning Americans live paycheck to paycheck

Virginia goes back to Shedrick: Is McKneely next to get a push from Bennett?

There are many draws to Super Bowl Sunday. From the food, halftime show and the commercials, for many, it’s the social event of the year. Oh, and then there’s the actual game, if anyone is actually watching that.