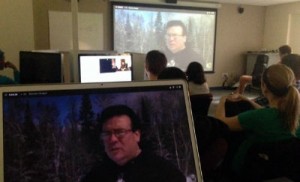 Major news media such as Al-Jazeera America and the New York Times are paying attention to an environmental and political crisis developing in northwestern Wisconsin, and Eastern Mennonite University professor Paulette Moore and her spring documentary students are in the middle of the news story.

Their film, “To Wisconsin With Love,” is helping to shape a national conversation about environmental justice, citizen activism, indigenous rights, and nonviolent resistance.

Largest open-pit mine ever?

The 45-minute film focuses on the proposed creation of the world’s largest open-pit mine – nearly four miles long, 1,000 feet wide and 900 feet deep – in the Penokee Hills, just miles from the world’s largest freshwater lake and several Native American communities that rely on the water source to preserve tribal traditions and economic well-being.

“EMU students are helping drive a very important dialogue about one of the major issues of our day,” says Moore, associate professor of visual arts and peacebuilding.

“This is a story that is far from over,” added Pete Rasmussen, co-founder of the Penokee Hills Education Project and a prominent voice in the film. He noted the recent revelation of a $700,000 donation from mining company Gogebic Taconite to Governor Scott Walker’s recall campaign.

The film traces three compelling story lines – the extractive industry of open pit iron ore mining, its potential effect on one of the world’s largest freshwater lakes, and the multicultural group of citizen activists who have been monitoring the site and protesting the proposal. Woven into the narrative is a Greek chorus of West Virginia residents affected by the toxic chemical leak of coal-washing liquid that poisoned the water supply of 300,000 people in January 2014.

The documentary is “a message to the people in Wisconsin of what will likely happen if the mining is continued,” said student filmmaker Anne Diller ’14. “After listening to the people from West Virginia share their warning to Wisconsin, it felt like we were piecing together a love letter.”

Since its premiere June 20 on the reservation of the Bad River band of the Lake Superior Chippewa tribe, the film has earned accolades from local activists.

Jill “Peach” Hartlev, a member of the tribe’s Anishinaabee Environmental Protection Alliance, helped host the premiere, which was open to the public and included a potluck, poetry, singing and dancing. Several of those interviewed in the film were also present, including tribal chair Mike Wiggins Jr.

“It was an overwhelmingly positive response among those present,” Hartlev said, who added that Moore’s presence made the event special. “It was very moving for me personally to see those faces and hear those voices. These are personal friends and also people who I work closely with. I was moved to tears.”

Rasmussen said he appreciated “the connections the students made, how it showed an understanding of how we’re all connected, from West Virginia to Virginia to what’s happening here.”

Putting all the pieces together

Local and national media had reported on the proposed project, Rasmussen said, but “the film put all the pieces together and has definitely had a broader impact with audiences who are not as familiar with the issue and the idea that we’re facing this all over the country in a systemic way.”

Hartlev and Rasmussen, who both attended multiple regional showings throughout the summer, noted that the various audiences shared an especially visceral reaction to Gogebic Taconite spokesman Bob Seitz’s statement about the presence at the proposed site of grunerite, a rare asbestiform rock that carries the risk of airborne carcinogens. Seitz’s statement contradicted both the findings of the company’s own scientists, as well as that of Northlands College geologist Tom Fitz.

“There were gasps and laughter, expressions of disbelief during that segment,” said Rasmussen. “The people who have been paying attention in meetings and hearings have seen that denial, but there’s only a few people going to those meetings. So to get that on film is motivating to the public, because it’s something they’ve heard about, but they haven’t seen it.”

Moore – an experienced videographer who has produced documentaries aired by the Discovery Channel, pbs and National Geographic – noted that the experience of capturing that interview on film and dealing with the ethical aftermath was unsettling, though educational for her students.

“The students are really in the middle of this, and that interview segment shows that,” she said. “Here was a company spokesperson offering misleading information, right on film, and we spent a lot of time talking about the best way to handle it.”

Moore teaches a documentary filmmaking course every two years. (Previous student-involved projects include a biography of peaceworker Dan Terry and a feature about local cooperative restaurant The Little Grill.)

The Visual and Communication Arts department challenges students – and professors, Moore says – to think about “EMU’s message of service and responsibility in a media industry which is so entitled and can be quite destructive and powerful.”

“How do we think about media as creating a sacred space?” Moore said. “What’s our role as a witness to the social justice movement?’

Moore was introduced to the documentary’s subject matter by Danielle Taylor, who holds a master’s degree in conflict transformation from EMU. Taylor created the “Voice of the Penokee Hills” video project and blog.

Moore began filming in the fall of 2013. On several occasions, she stayed at a harvest camp established near the proposed site by the Lac Courte Oreilles band, where participants monitor a mining project entrance, conduct research, and practice traditional hunting and foraging skills.

By the time the spring 2014 documentary class began, she had dozens of hours of footage and faced the unique challenge of “getting my students excited about something I was already passionate about.”

That wasn’t a problem after the Elk River toxic chemical spill on January 9, which contaminated the water supply 300,000 residents of Charleston, West Virginia, for days.

Senior Emma King and junior Karla Hovde interviewed several West Virginia residents, including Bob Kincaid, host of Head On Radio and a frequent contributor to the anti-mining discussion in Wisconsin. Those interviews had a dramatic impact on King.

“I really saw how misusing the environment hurts everyone,” King said. “Talking to people firsthand, rather than reading about it in a book, put this into perspective for me.”

Her involvement in the project changed her from a casual supporter of environmental causes to a passionate proponent.

“We were able to amplify the voices of a group of people who were concerned about their community,” Diller said. “I felt like I had a personal relationship with the people as we edited their interviews. They opened up and shared their stories with us and trusted us to get their message out to the world.”

Moore says the film is an official selection of the Big Water Film Festival. A spring showing on campus is also planned.