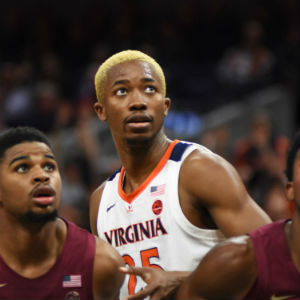 Virginia, on an eight-game winning streak, was confident as it prepared for the ACC Tournament, “ready to surprise the world,” senior Mamadi Diakite said.

We all know what happened. Instead of playing in Greensboro, and then the 2020 NCAA Tournament, which would be in the Sweet Sixteen today, Diakite is, like many of the rest of us, at home, social distancing, as he works to finish up classes and get himself ready for the 2020 NBA Draft.

“All I do is stay home, stay away from people,” said Diakite in an interview with reporters on Thursday, after a solo workout at John Paul Jones Arena, getting some shots up and basic conditioning.

Diakite, who led #16 UVA in scoring (13.7 ppg), started to become that guy this time a year ago, as the Cavaliers made their run to the 2019 national title, averaging 10.5 points, 8.2 rebounds and 2.7 blocks per game in the NCAA Tournament.

He declared for the 2019 NBA Draft, but withdrew after going through the pre-draft process, and returned to UVA for a fifth year looking to add to his game, which he very much did, showcasing a perimeter game (shooting 36.4 percent from three-point range) to complement what he was always able to do in the paint.

He admitted in a Thursday conference call with reporters that a key reason he came back was to also see if he could help lead Virginia back to the big stage.

“I thought was a great decision. I mean, it was made back then because we knew what was going to happen, not what was going to happen really, but well, would that set me up, place me in terms of, you know, draft board, or making my dreams, I mean, playing in the NBA, but also being able to help my team and the staff and, you know, be a part of something that was special again this year,” Diakite said.

“I know we didn’t get a chance to finish the year, but that was very valuable to do. That was a good decision.”

Diakite, like other athletes asked to talk about the shutdown of sports due to COVID-19, totally supports the decisions made by the various officials to do what has been done in the name of public health.

“The fact that we stopped, I understand that also might hurt us a little bit, but you know, it was something that we had to do in order to save a lot of people in the world,” Diakite said.

That doesn’t mean that it doesn’t hurt that he won’t get to see what Virginia could have done in the postseason.

The 2019-2020 ‘Hoos were 12-6 midway through the season, losing three in a row and four out of five in one tough midseason stretch, before going 11-1 down the stretch, and finishing with an eight-game win streak.

“Understand that people are dying around the world, you know. So, understand that we had to stop it. But again, I was trying to be a part of something that was very special,” Diakite said. “We were trying to make something happen again this year. We were not able to. It hurts my heart. A lot of people, including me, too, but it is what it is. We’ll have to deal with it.”

Back to the not much to do thing that many of us are experiencing right now: Diakite did make it a point to tune in on CBS and CBS Sports Network this week to the rebroadcasts of games from UVA’s run to the 2019 championship.

“Yes, I watched them, and I felt like I was back in the moment again,” Diakite said. “When I was playing, it was, you know, it hadn’t hit me this whole year, until now in the postseason, when I’m not doing anything. So, being able to watch that, being able to, you know, I realize I was a part of something very special is, you know, big for me. I mean, I came from … a country that’s very poor, a Third World country, and me being able to be on that stage where everyone isn’t able to get to, or where everyone, you know, doesn’t get the experience of, was very big for me.”

His eyes are on the NBA now. He made the pitch for himself as a value draft pick on the call with reporters.

“Well, I’m hearing some good stuff about myself,” said Diakite, who is getting some late-first-round love in mock drafts, for what that’s worth, which, Diakite doesn’t think it’s worth much, for the record.

“You know, all I can say is, you know, I’m a player. Wherever you want to play me, I’m ready for it. I’m just here to do the job. But, uh, you know, as far as what is happening on the on the draft boards, whatever, I don’t really care about that. That doesn’t decide who’s going first, second, third, whatever.”