Let it shine! Out of the Darkness walk helps friends, family remember those lost to suicide, work toward prevention 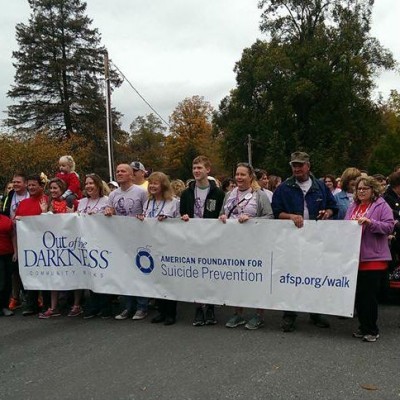 Amy Argenbright lost a cousin to suicide in May. Seeing others close to her impacted by what had happened “made everybody realize the need to talk about it and bring it to light,” said Argenbright, who organized a team for the Out of the Darkness walk, a fund-raiser for the American Foundation for Suicide Prevention held at Gypsy Hill Park in Staunton on Saturday.

The fund-raiser surpassed its $25,000 goal, passing the $38,000 mark, and was an even bigger success in terms of raising awareness, with more than 500 people taking part in the walk.

“It’s so wonderful to see hundreds and hundreds of people here, the community resources, the people here to say, we’re not going to be silent anymore about mental illness and suicide, and we’re going to break the stigma and bring it out of the darkness and shine a light on it,” said Ryan Newcomb, the regional director of the American Foundation for Suicide Prevention, which has set a national goal to reduce the number of deaths by suicide in the United States by 20 percent by 2025.

In 2013, the last year for which complete data are available, more than 41,000 Americans died from suicide, making suicide the 10th-leading cause of death in the U.S.

Funds raised at the Out of the Darkness walk will go toward more local public-awareness efforts and to research toward suicide prevention.

“Research, education, awareness, treatment, it’s so important. Mental illness is no different, and we need to look at that, learn from that, and realize what we can do to make strides,” Newcomb said. 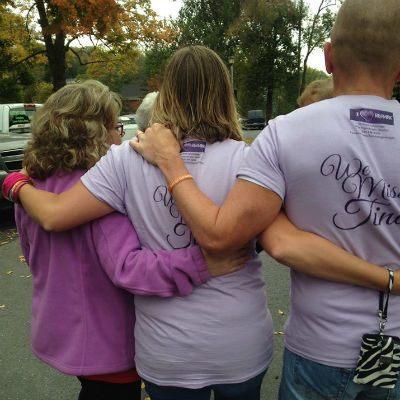 Kim Sours of Stuarts Draft led the effort to organize an Out of the Darkness walk in Staunton in memory of her daughter, Keri Carter, who died on Sept. 17, 2013.

Walking at the head of the mass of 500-plus people taking part in the Out of the Darkness walk Saturday morning, Sours was “blown away” at the turnout.

“For Keri, I would think that she would want me to do this,” Sours said. “As much as she struggled, she wanted to get better. She would be very proud that we’re trying to help others.”

Crystal Graham of Waynesboro led the “Remembering Tina” team that had 60 walkers and raised more than $7,500 for the cause.

Graham, the vice president of Augusta Free Press, got involved in memory of her identical twin sister, Christina, who died on Sept. 23, 1992.

“It’s great for awareness,” Graham said. “It’s also great for our team, for all of us to be able to get together, 23 years later, and remember how much we loved Tina, and come together to try to put an end to these tragedies. This happens to more people than anyone can imagine.”

More information on the American Society for Suicide Prevention is online at www.afsp.org.