Just like the Titanic: And the bands played on 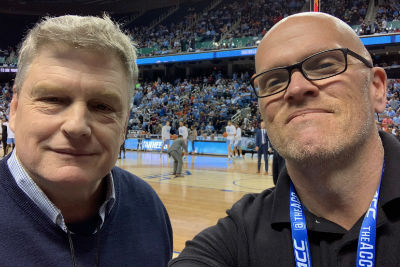 About 10:30 Thursday morning is when it all started to unfold. In the inner recesses of the Greensboro Coliseum, a press conference was starting, led by ACC Commissioner John Swofford.

The commissioner stepped to the stage to address the assembled media. A group of media prepared to cover the quarterfinals of the ACC Tournament: without fans, with the exception of a limited number of tickets available per school for family and close friends.

Sports leagues and postseason tournaments were shutting down around the country to ease fears about the coronavirus pandemic.

Initially, commissioner Swofford’s answer was a no. Sitting in that press room, I was waiting for a “however,” to provide the conference some wiggle room if needed. And shortly they would.

Swofford said he’d been in discussions with all Power 5 conference leaders. The press conference was originally scheduled for 10, but was about 30 minutes late because of those discussions .

After speaking with folks from the CDC and school presidents, Swofford and other ACC officials reached a conclusion, albeit a tentative one.

The four games, he stated, would go on that day, heck, both Clemson and Florida State were already engaged in pregame workouts just a few steps away.

Continue, with one exception: the item about limited fans being allowed in the building. Even upon entering the coliseum, a change was already implemented, as media were required to present photo identification along with the issued press credential.

After leaving the press conference and returning to the playing court, I could detect an uncomfortable feeling walking through the media work room.

I couldn’t quite determine what was wrong, but there just wasn’t that buzz I’ve experienced before.

Once I reached the playing court, FSU, the tourney’s No. 1 seed, was well into its pregame workout. Clemson players soon occupied the other end of the floor.

Those of us that arrive early for games have seen these drills countless of times. And for myself, even void of fans, things started to return to normal again.

When the Florida State band began to play I almost had convinced myself that this would be OK.

But then reality set in for me when I turned to the seating area and witnessed ushers with face masks and gloves wiping down seats with disinfectant spray. Suddenly reality embraced me again.

This was not normal, and maybe not right.

I began my walk up to the press seating area thinking that despite the uncertainty of the events taking place, I was in the center of some historic circumstances. It was strange to think that I was in the middle of history unfolding.

Did I think they should have cancelled the games? Honestly, I did not know. I only allowed myself to think that myself and colleague Chris Graham were both lucky to have the opportunity to be on site for this almost surreal turn of events.

As I watched the players warm up, both teams seemed to be at a high energy level.

Soon fans started to trickle into the arena, occupying only a tiny bit of the venerable Greensboro Colosseum.

Players from both teams warming up, both schools bands taking turns at filling the arena with music, all college basketball fans understand.

The teams went back to their locker rooms, separated by only about 20 feet.

But then time began to slow.

As I mentioned, I’ve watched pregame workouts hundreds upon hundreds of times (more like thousands upon thousands, but I’m trying to trend younger)

Media reports were swirling regarding cancellations to other ongoing postseason tournaments.

Swofford in his presser had spoken of “fluid” situations.

Somehow I was able to traverse from the upper media seating level to the locker room area in time to get a glimpse behind the curtain.

Both teams were gathered in the hall area when Swofford appeared.

An eerie quietness fell upon the hallway.

While I was in the same hallway, I was not close enough to hear the almost whispering conversation taking place between Swofford and both teams.

Silence then filled the hallway for about 10 seconds. Suddenly a Coliseum official turned to me and said, “That’s it, it’s done.”

Swofford then broke from the crowd and walked past me toward the playing court. He was noticeably shaken and emotional.

The limited media then followed him and players from both Clemson and FSU followed.

Swofford walked out on the floor and grabbed a microphone. He quickly was handed another mic bearing the official ACC logo.

You could tell this was being done on the fly.

Surrounded by players and coaches from both teams, Swofford made the announcement to end this year’s ACC tournament.

Not delay, not suspend. End.

That moment will forever be frozen in time for me.

For many others as well.

After Swofford spoke and presented FSU with the championship trophy, another time-freezing moment took place.

Both bands struck up and played their hearts out.

The bands did indeed play on.