Surrounded by boxes of supplies and volunteers packing blue and gray buckets to create relief kits, Eastern Mennonite University senior Ryan Faraci still wanted to do more. His efforts, and those of others who were working to aid hurricane victims in Florida and the Caribbean “lit a fire inside of me,” he said. 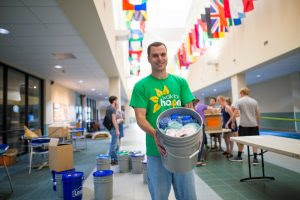 Ryan Faraci, who comes from the Temple Terrace suburb of Tampa, Florida, holds a packed bucket. He wants to continue relief efforts for hurricane survivors in the coming weeks and months.

“You really can’t do enough,” he added. “I feel good today, but I want to do more. Look at Puerto Rico. We are all in pretty much a blessed and privileged position and I want us to pass it off to people who need it. I’d like to see us consider a long-term sustained effort because the problems associated with these events aren’t going away any time soon. People are going to need help for a long time.”

A succession of recent natural disasters — from Hurricane Harvey, hitting the Texas coast Aug. 25, to Hurricane Irma in the Caribbean in early September and most recently Hurricane Maria in Puerto Rico — left many EMU students wanting to help those in need. The result was a relief effort sponsored and supported by a coalition of groups, from Y-Serve to Campus Ministries to the women’s volleyball team and individuals such as Faraci, who comes from a suburb of Tampa, Florida, and has experienced firsthand the devastation of several hurricanes.

Sophomore volleyball players Meredith Stinnette and Beck Hoskins also wanted to help. Hoskins, a graduate of Westover Christian Academy in Danville, Virginia, had packed relief kits before with a Danville organization called God’s Pit Crew, while Stinnette learned of a water bottle collection for Texas residents in her hometown of Altavista. The roommates visited EMU Campus Ministries and asked “What are we doing to help?”

From there, the effort spread, coordinated by Pastoral Assistant Alexa Weeks, says Brian Martin Burkholder, campus pastor. “Alexa is also on the volleyball team, so there was this synergy that helped to move things forward. We held a campus meeting to determine where our efforts would go, and we decided to work primarily through Mennonite Central Committee.”

Weeks circulated a list of items to donate, and gifts from the community began to pour in, including a large donation from EMU Y-Serve to build 100 kits. The kits, packed in a bucket, include towels, bath and laundry soap, toothbrushes, combs and fingernail clippers, bandages and sanitary pads.

“The bucket has many uses, from carrying water to storing important papers, and the standardized list of supplies simplifies the packing process,” says Luke Schrock-Hurst, Mennonite Central Committee (MCC) representative to EMU.

More than $700 was raised in a few short days by the volleyball team, galvanized by a challenge from Coach Carrie Bert that tied team improvement to service work. Pledging to improve their hitting percentage, the players also agreed to donate the same number of items to hurricane relief. But their efforts soon grew to much more beyond a $5 personal donation.

Bert’s family donated to the project, and then her church offered more than $200. A donor later contacted Bert to offer a matching amount to whatever the team could bring in. The team of 17 players rallied family and friends, eventually helping to raise $728 in 48 hours. On the team’s shopping trip to Walmart, the store manager donated a $50 gift card.

“I’m pretty pleased with how much we’ve brought in and the efforts that went into this,” said Hoskins, who came to the Sept. 25 packing event with her teammates on a break during practice. “We really came together for this.”

A large shipment of relief items was sent on Friday, Sept. 22 to the Oceola Council on Aging in Kissimmee, Florida, through a local Vietnam veteran’s group – a connection made after Burkholder saw the project announced in the local newspaper. Schrock-Hurst said he would be taking the remaining 100 kits and leftover supplies to the Gift and Thrift less than a mile away. From there, the buckets would be moved to the nearby Hinton-based Mennonite Disaster Relief headquarters, where they would join the next shipment south.