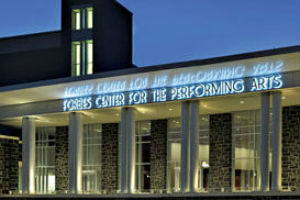 The Forbes Center for the Performing Arts at James Madison University is opening its doors to the community to celebrate its 10th Anniversary Season with an open house on Saturday, Sept. 7, from 10:00 a.m. to 2:00 p.m.

The event is free of charge to the public. Open house highlights include backstage tours every 15 minutes as well as educational workshops and mini performances in the venues throughout the day.

Guests can attend an interactive dance workshop and mini theatre and musical theatre performances; learn how to play the ukulele with JMUke; learn about the design and construction of Steinway pianos; learn how singers train their voices; experience demonstrations on stage combat and stage makeup techniques; and go behind the scenes with the Marching Royal Dukes and the company of DanceWorks Chicago. DanceWorks Chicago is headlining the New Dance Festival, which takes place September 6-7 at 8:00 p.m. in the Forbes Center Mainstage Theatre.

Children can also get their faces painted as well as participate in theatre and music games and a Broadway dance workshop. In addition, attendees can sign up to win free tickets to upcoming Forbes Center performances.

Free parking will be available in the Warsaw Parking Deck, directly behind the Forbes Center.