Andrew Yang knows how use the bully pulpit 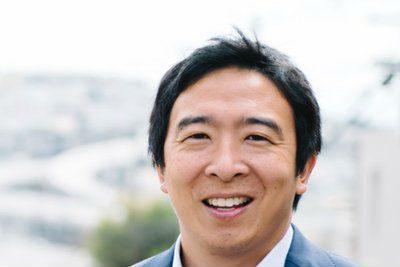 Andrew Yang, unlike most Democrats, dude gets it.

(Checks Wikipedia) Andrew Yang: appointed by Obama to something or the other.

But now, I can’t get enough of the guy.

“I don’t think Donald Trump could run a mile. Would you guys enjoy trying to watch Donald Trump run a mile? That’d be hysterical. What does that guy weigh, like, 280 or something?”

This was Yang yesterday, talking to ABC News.

Pressed on his remarks, Yang doubled down.

“I challenge Donald Trump to any physical or mental feat under the sun. I mean, gosh, what could that guy beat me at, being a slob? He’s an embarrassment.”

“I can do approximately infinity more pushups than Donald Trump. I want to go through this intellectually, what could Donald Trump possibly be better than me at? An eating contest? Like something that involved like trying to keep something on the ground and having really large body mass? Like, if there was a hot-air balloon that was rising and you needed to try and keep it on the ground, he would be better than me at that, because he is so fat.”

What Yang gets that most Democrats don’t: you don’t let a bully bully.

And then what happens: the bully, invariably, runs crying away.

Case in point: Trump, at a rally last night in New Hampshire.

“That guy has a serious weight problem,” Trump said, pointing to a man that he assumed was a protestor.

Turns out, the man he was fat-shaming was a supporter, whose crime was just pointing out to security who the thin, healthy protestors were, so they could be removed.

“Go home, start exercising,” Trump said to the man, who was wearing a “Trump 2020” shirt, as security officials began escorting the protesters out of the arena. “Got a bigger problem than I do!”