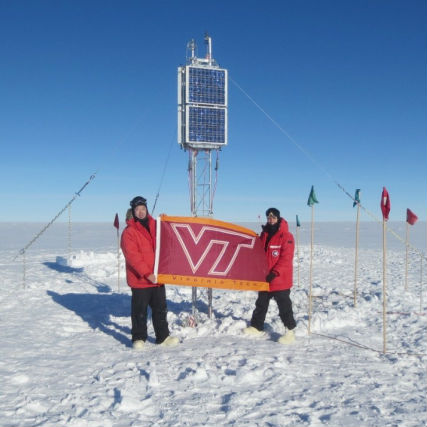 Zhonghua Xu (left) and Mike Hartinger represent Virginia Tech in front of solar panels at their base camp in Antarctica.

New evidence regarding a scientifically controversial theory about the earth’s magnetic field and space weather was discovered almost as soon as Virginia Tech researchers finished installing six data-collection stations near the South Pole in January. The researchers observed that the polar ionosphere — southern, northern, winter, summer — is subject to a constant current.

For the first time, data confirmed that regardless of the hemisphere or the season, waves on the boundary of the magnetosphere produced by solar-wind pressure changes are linked to both the northern and southern ionospheres by electric currents of the same magnitude, researchers said.

The project to develop and deploy these autonomous data-collection stations in the Antarctic has progressed over a seven-year period. The latest findings have not been published or peer-reviewed.

Supported by $2.66 million from the National Science Foundation, Robert Clauer, a Virginia Tech professor in the Bradley Department of Electrical and Computer Engineering in the College of Engineering, and his team designed and hand-built six autonomous data-collection stations, and installed them, piece by piece, near the geographic South Pole for initial testing.

The autonomous data-collection stations were placed along the 40-degree magnetic meridian (longitude), deep in the polar cap areas under the auroras. The stations — in the harsh environment of the remote east Antarctic plateau — are the Southern Hemisphere counterpart to a magnetically conjugate chain in Greenland.

These space weather stations allow researchers to watch how the behavior of the sun and the solar wind — an unbroken supersonic flow of charged particles exploded from the sun — changes over time and how the earth’s magnetic field responds to solar wind variations — all with the goal of building a detailed, reliable model of space weather.

They hope that, eventually, space-weather forecasting will become as reliable as today’s winter storm warnings are for school systems. Although invisible to the naked eye, space weather can have serious, detrimental effects on modern technological infrastructure, including telecommunications, navigation, and electrical power systems.

The National Science Foundation manages the U.S. Antarctic Program, through which it supports researchers nationwide, provides logistical support to the research and operates three year-round manned stations in Antarctica.

Clauer and the magnetosphere -ionosphere science team have been monitoring the electric current systems in the magnetosphere — specifically currents that connect to the ionosphere. This region in the upper atmosphere is ionized — stripped of electrons — by solar radiation.

When it’s summer in the Northern Hemisphere, more direct sunlight ionizes atoms in the atmosphere. This phenomenon creates a highly conductive ionosphere in the summer months, and a poorly conductive one in the winter.

“This finding is a new part of the physics that we need to understand and work with,” said Clauer. “It’s a bit of a surprise, because when you have a current, you usually expect a voltage relationship, where resistance and current are inversely related — high resistance equals small current; low resistance equals large current.”

Space weather is driven by solar wind. When solar wind beats against the magnetic field surrounding the planet, it can create beautiful auroras, as well as electromagnetic impulses that can negatively affect navigation systems, telecommunications, and power grids.

“The solar wind interacts with Earth’s magnetic field in a manner similar to a fluid, but an electrically conducting fluid,” described Clauer.

A chain of data-collection stations in Greenland allowed researchers to take measurements in the Northern Hemisphere. Until recently, these data were divided into summer and winter, and the information gathered during the winter months was used to approximate what was happening in the Southern Hemisphere during the northern summer.

“We didn’t have a full picture of what was happening in the space environment because we could only observe one hemisphere, but magnetic field lines are connected to both hemispheres,” said Clauer. “It was important that we look at them simultaneously.”

The stations run autonomously and are powered by solar cells in the Antarctic summer and lead-acid batteries during winter. They contain a collection of instruments, including a dual-frequency GPS receiver that tracks signal changes produced by density irregularities in the ionosphere, and two kinds of magnetometers that measure the varying strength and direction of magnetic fields. The data is transmitted to Blacksburg, Virginia, via iridium satellites.

Clauer’s team will continue collecting information from both sets of data stations. They hope to be operational throughout the 11-year solar activity cycle, depending on snow accumulation. They will be watching how the behavior of the sun and the solar wind changes over time and how the earth’s magnetic field responds to variations—all with the goal of building a detailed, reliable model of space weather.