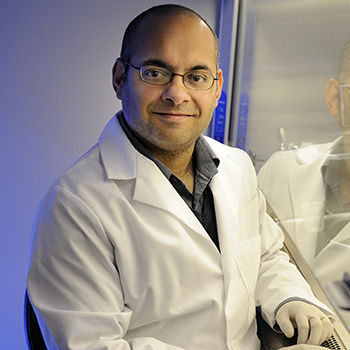 The optic nerve could be the microscope into brain disorders that scientists need. An underdeveloped optic nerve – one that never fully developed its cells or one whose cells died off – could indicate other dysfunctions in the brain.

“Optic nerve hypoplasia is the leading cause of childhood blindness, but we don’t know much about it,” Mukherjee said. “Anything we find will be significant. It’ll be completely new.”

In the United States, optic nerve hypoplasia is responsible for 15 percent of childhood blindness, a figure that has doubled in the past decade and continues to increase. Yet there is no treatment to prevent or repair malformation of the optic nerve. Mukherjee and his colleague Michael Fox, an associate professor at the Virginia Tech Carilion Research Institute, want to change that.

“The idea is simple, but the research is complicated,” said Mukherjee, who is also an assistant professor of biological sciences in Virginia Tech’s College of Science.

“Does it mean the retinal output cells are fewer than normal?” Mukherjee asked. “Where does the disease begin? When does it begin? We need to know more than the name.”

Although the exact mechanism of what causes optic nerve hypoplasia is unknown, scientists do know at least one of the molecules involved – a protein called CASK, which usually provides structural support and helps form the adhesion sites between synapses that neurons use to communicate. The support from CASK can become a hindrance if the protein is mutated or missing. The adhesion sites end up deformed and can lead to developmental disabilities, including autism spectrum disorders.

“Often, people with autism spectrum disorders also have visual defects,” said Fox, who is also an associate professor of biological sciences in Virginia Tech’s College of Science. “We’re studying whether the CASK molecule is important in forming and maintaining the connections between the retina and the brain.”

Fox and Mukherjee used a rodent model to study the optic nerve without the CASK gene. In a healthy optic nerve, axons transmit information along the length of the nerve, from the eye to the brain. In CASK-deleted mutants, the axons were missing.

“Maybe optic nerve hypoplasia and atrophy are the same thing, and it’s just the timing that leads us to call it hypoplasia or atrophy,” Mukherjee said. The scientists could see that, whatever the cause, the axons were missing. “There were big open spaces where the axons should have been.”

The missing axons weren’t enough to answer the question of atrophy or hypoplasia in optic nerve development, though. The researchers needed to visualize how the optic nerve makes connections to neurons.

The scientists are now using fluorescent dye tracers to label the synapses between the retinal output neurons and their target cells in the brain.

“In optic nerve hypoplasia, we think the connections might be broken,” Fox said. The preliminary data from Mukherjee and Fox’s research suggest that there is indeed a connectivity problem.

Therein lies the next question – is the speaker or the listener responsible for the disconnect? Fox and Mukherjee suspect it’s the speaker – the optic nerve. Without a CASK gene, the optic nerve may have all the information, but it will never form a way to communicate with the other neurons.

“You have to use it or you lose it. If the nerve can’t make the right kind of connection, the axons degenerate and die out,” Mukherjee said. “That’s likely what we’re seeing here.”

According to Mukherjee, even more disorders may be involved, as evidenced by the children with optic nerve hypoplasia who also have autism spectrum disorders.

“We have to remember that the optic nerve is just the visible part of the central nervous system,” Mukherjee said. “It makes sense that optic nerve hypoplasia wouldn’t affect just the optic nerve; it could cause other problems or be a symptom of a different source.”

The visibility of the optic nerve will continue to be helpful in their research, according to Fox.

“The eyeball, with the retina at its back, is a natural isolation chamber where we can do manipulations to see and fix connections to the brain,” Fox said. “Eventually, as we learn more about those connections, we’ll be able to develop therapies to correct visual system problems.”

FEMA has approved a Major Disaster Declaration for Buchanan County and Tazewell County for damage associated with July flooding.