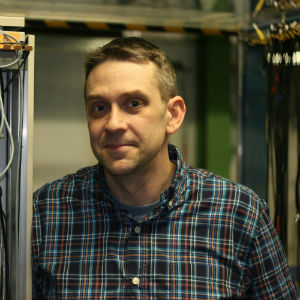 Earlier this month, a large group of international scientists announced they recorded the sound of two black holes colliding, a blockbuster moment in the science community that proves Albert Einstein’s century-old theory of relativity and the existence of gravitational waves – ripples in the space-time fabric that were up until now the stuff of science-fiction.

More than a thousand scientists worked on the discovery. Among them is James Lough, a native of Blacksburg and a 2001 graduate of Virginia Tech’s Department of Physics, part of the College of Science.

Lough is now a post-doctorate researcher with the Max Planck Institute for Gravitational Physics, also known as the Albert Einstein Institute, in Hannover, Germany. Known as AEI for short, the institute runs the GEO600 gravitational wave detector, one of the world’s most sensitive interferometers and one part of the larger LIGO Scientific Collaboration team that detected the plinking sound of the black holes early in the morning of Sept. 14, 2015. In Hannover, Lough works as lead scientist at the GEO600 interferometer.

The discovery was made by the twin Laser Interferometer Gravitational-wave Observatory – that’s what LIGO is short for – detectors, one in Livingston, Louisiana, the other in Hanford, Washington. In its Feb. 11 announcement, the LIGO team said the recording “opens an unprecedented new window onto the cosmos.” The collision of the two black holes was estimated to have occurred 1.3 billion years ago, according to LIGO’s news release.

After earning his bachelor’s degree at Virginia Tech and already an Army veteran, Lough became a helicopter pilot for the U.S. Navy. He worked his way into the research and engineering division of U.S. Navy Naval Air Systems Command in Maryland, focusing on quantum optic projects He earned his Ph.D. in 2014 from Syracuse University, and took the research job at the Albert Einstein Institute in Germany.

What inspired you to study physics and then return later for your Ph.D.? As a child, I was fascinated with the NASA space program. I became interested in model rockets and learned some basic physics from that. Also, my father was into electronics. But, what really got me hooked was reading science fiction by Isaac Asimov. He included a lot of physics in his stories. Then I read “A Brief History of Time” by Stephen Hawking. His origin of the universe material really fascinated me. I would wonder things such as where the dimensions we live in could have come from. And growing up in Blacksburg provided opportunities I might not have had somewhere else. This was a good move by my parents.

How did you come to work on the GEO600 team? I was in the collaboration as a graduate student at Syracuse University. While I was in Germany for a collaboration meeting I took a tour of GEO600 and later applied to come out. The motivations for me were partly personal, in that it was a nice location and would give the family the opportunity to live in a foreign country and learn a new language. Also, working at GEO600 provides a unique opportunity to work on a fully functional observatory and do experiments and develop new technologies for future detectors.

Was there a celebration after the discovery? This signal was so loud, it was hard not to be excited especially at first. We really wanted to be sure though. So, there was a long — and important — process of validating the discovery. Excitement started to build up again toward our February announcement. For me it was even hard to sleep. For the announcement, we watched the live feed from Washington, D.C., as part of our local press conference at the institute with a celebration afterwards. My wife and kids came with me to see the announcement because this was such a momentous event. It’s been an incredible experience to be a part of such a significant discovery.

What is your part in the LIGO project? My work is mostly in making the machines work better and improving their sensitivity. The focus of my thesis work was on an advanced technique in mirror stabilization using what we call radiation pressure, which is the force generated by bouncing photons off a mirror. This hasn’t been implemented in a detector yet. For Advanced LIGO, I created a system that compiles real-time diagnostic information. Currently, my main research is on a system to reduce noise due to quantum uncertainties known as “squeezing.” This is one technology pioneered at GEO that will be implemented in advanced LIGO studies in the near future.

What was the process of confirmation from the first detection of noise to the announcement? We detect noise all the time. Noise that comes from our detectors, not from outer space. The signal was seen from a couple of my colleagues in Germany actually in the output of some automated analysis pipeline that continuously runs. It looked perfectly like what we expected with the frequency increasing with time, the “chirp.” We could see this clearly right away because it was so loud. First, we had to rule out a hardware injection, which are fake signals we purposefully inject into the detector to test the instrument and the analysis pipelines. At the same time we had to freeze the detector configuration for a while in order to get sufficient background data and do careful calibration. Then we could run our more sensitive offline analysis pipelines. We spent a lot of work to make sure the signal we saw couldn’t have been from something else.

What is the impact of this discovery on the general public? This opens up a new window on the universe. We can observe things in a way we haven’t been able to before. The analogy that we make is that we could see the universe for a long while, but only now are we able able to hear the universe. In the future, we will be able to associate gravitation waves with optical, radio, x-ray, gamma-ray, and neutrino observations. With new observations, we can learn more about the massive objects we share our universe with. More down-to-earth, we have had to really push the technology envelope to enable this detection and we will keep pushing to enable more detections.

Any words of advice for undergraduate physics students? Get involved in research early. It’s really the best if you plan to stay in academia. It also counts as work experience if you decide to go into industry. If you’re interested in working in industry with a physics degree, it’s critical to get some work experience as a student.