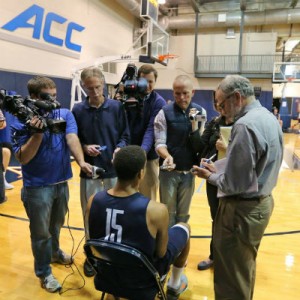 But that’s all in the past.

“I think a big mistake would be to try to compare themselves or ourselves to last year’s team. I think the key really is, and I told them this, for you as a group, you’re a different team,” Virginia coach Tony Bennett said at today’s UVA basketball media day in the practice gym at the John Paul Jones Arena in Charlottesville.

The different team will look the same in a lot of respects. Bennett does have to account for the losses of graduates Joe Harris and Akil Mitchell, both of whom are fighting for NBA roster spots in the preseason. But the Cavaliers return seven of their top nine scorers from 2013-2014, get the services of redshirt freshman point guard Devon Hall, and add a talented freshman class that will add depth both on the bench on game days and on the practice court at JPJ.

The focus for the group is to build on the hard work and success of the 2013-2014 Cavaliers to take Virginia basketball to new heights.

“It’s not about listening to expectations or letting those guide you to your goals. It’s about us setting our own goals to what we want to achieve,” said Malcolm Brogdon, a redshirt junior who was a first-team All-ACC selection in 2013-2014.

The internal goals might exceed what the fan base has been chattering about since the spring, to hear Brogdon tell it.

“I think we can make a deep, deep run into the tournament,” Brogdon said.

The various experts seem to agree. Most preseason college hoops guides have the Cavs a solid Top 5 to Top 10 team. The preseason USA Today Coaches Poll released last week pegged Virginia at #8 nationally, one of four ACC teams (Duke, UNC and Louisville) in the Top 10.

Which might be part of the reason that Bennett is stressing to his team that they can’t think they’re defending anything. It’s going to be hard for any of the Big 4 to duplicate the run that UVA had in 2013-2014, running through the ACC regular season with a 16-2 record, the only blemishes a four-point loss at Duke and an overtime loss at Maryland, then bringing an ACC Tournament trophy back to Charlottesville for the first time in 38 years.

If anything, the 2014-2015 Cavs are flying a little below the radar, with the attention given to Duke and its crop of one-and-dones, the annual preseason talk about North Carolina returning to a championship level, and the changes to the alchemy that adding Louisville to the ACC brew will bring.

“That’s a mighty basketball league,” Bennett said, adding that the challenge to compete in the ACC is to “play well, because if you can play well, it still might not be enough, but everybody’s in that boat.”

Under the radar for a championship team with seven returnees, on the one hand, and on the other, Virginia enters 2014-2015 knowing that it will get everybody’s best shot every time out.

“We’ve got a target on our back every single game,” said Justin Anderson, a junior guard who was the 2014 ACC Sixth Man of the Year. “Last year, we were the guys chasing after people. This year, everybody that’s on our schedule is marking us off, circling us.

“We understand that that’s going to happen, it’s basketball, but we just have to make sure that we do what we do, do our best to prepare every single day in practice, and get ready to go to war every game,” Anderson said.