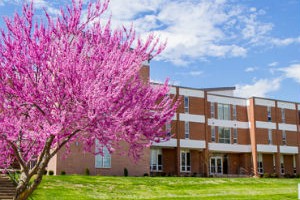 TenTalks is a feature offering of EMU’s Homecoming and Family Weekend. Three 10-minute presentations are followed by audience Q &A.

The 2019 event honors and celebrates the 25th anniversary of EMU’s Center for Justice and Peacebuilding and its theme of “celebrate, reflect, dream.”

Historian and peacebuilding advocate John E. Sharp speaks first on the theme of “celebrate.” Tammy Krause MA ‘99, a pioneer of defense-victim outreach who has worked on landmark cases such as the Oklahoma City bombing and the trial of Zacharias Moussaoui, will speak on the theme of “reflect.” Darsheel Kaur MA ‘17, an educator, artist and youth advocate from Ohio, speaks on “dream.”

Sharp recently retired as history and Bible professor at Hesston College in Kansas after 13 years of teaching. He spends his time researching and writing, leading Anabaptist and Mennonite history tours to Europe and Central Asia, and promoting peacebuilding.

Sharp is also a caretaker for the work and life story of his son, United Nations armed group expert Michael J. “MJ” Sharp, who was murdered on March 12, 2017, in the Democratic Republic of the Congo. Earlier, MJ had been an Mennonite Central Committee volunteer in Eastern DRC and a Mennonite Mission Network appointee to the Military Counseling Network in Bammental, Germany.

The MJ Sharp Peace and Justice Endowed Scholarship aids in bringing peacebuilders to study at CJP, with priority given to those from the Democratic Republic of Congo.

Among Sharp’s books are My Calling to Fulfill: The Orie O. Miller Story (Herald Press, 2015) and The Bible as Story: An Introduction to Biblical Literature, co-authored by Michele Hershberger and Marion Bontrager (WorkPlay Publishing, 2017).

He was director of the Mennonite Church USA Historical Committee and Archives, 1995-2005, and served as pastor in Kansas and Pennsylvania, 1977-1980 and 1983-1995. Sharp earned a BA in communication from Goshen College and an MDiv from Anabaptist Mennonite Seminary, in Elkhart, Indiana. He also did graduate work in history at Wichita State University.

He and Michele Sharp are the parents of two adult daughters, Erin and Laura, and son MJ.

Krause has worked on federal death penalty cases throughout the United States for the past two decades. She is the national defense-victim outreach coordinator for the Federal Death Penalty Resource Counsel Project. Krause pioneered the legal profession’s defense-victim outreach, which seeks to establish relationships between the defense attorneys and survivors and victims’ family members of violent crime in an effort to bridge the historical gap between the two.

Krause holds a PhD from the University of Manchester School of Law in England and a master’s degree in conflict transformation from the Center for Justice and Peacebuilding at Eastern Mennonite University.

Krause’s work earned a Soros Justice Fellowship, 1998-2000, and an Ashoka: Innovators for the Public Fellowship, 2001-2004. Krause lives in Harrisonburg with her husband, Jeff. They have two sons, Noah and Sam, and enjoy spending time hiking in the Shenandoah National Park.

Kaur is an educator, cultural worker and artist, youth advocate and restorative practitioner. As a Punjabi immigrant, a student of Sikhi and a woman of color, she draws strength and courage from her identities and uplifts the beauty and opportunities in diversity.

She completed her undergraduate degree at Wright State University in organizational leadership, with minors in youth and community engagement and Spanish. She graduated with a master’s degree in conflict transformation from the Center for Justice and Peacebuilding at Eastern Mennonite University, focusing on restorative justice/racial justice and psycho-social trauma and resilience. Using her sensitivity as a strength and finding truths and wisdom from her own personal and inter-generational healing journey, she facilitates circles, trainings and workshops.

Kaur is an adjunct professor at Wright State University in her hometown of Dayton, Ohio. She serves on the board of the Dayton International Peace Museum and volunteers her time building and strengthening relationships with youth in her city who have been impacted by criminalization and the school-to-prison pipeline, generational poverty and violence.