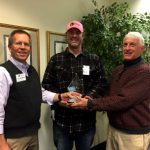 The USDA Food Safety and Inspection Service has proposed an amendment to nutrition labeling regulations for meat and poultry products.

The USDA has announced a new initiative that expands opportunities for farmers and ranchers to enroll in the Conservation Reserve Program.

Tthe USDA will offer farmers and ranchers more opportunities to enroll in the Conservation Reserve Program.

Women who own or manage farm and forest land in Fauquier and Loudoun can participate in workshops focused on women in agriculture.

The National Agricultural Statistics Service is conducting its second annual survey to measure the environmental benefits associated with conservation practices on agricultural land.

John Munsell has been awarded $1.4 million to expand uses of agroforestry to enhance farm and forest production while achieving strategic conservation goals.

Each year, Virginia farmers implement practices on their farms that help protect the environment and the Chesapeake Bay. Those practices are not cheap, and farmers often rely on state or federal cost-share programs to help pay for the measures. Virginia Farm Bureau Federation leaders will again urge state legislators to adequately fund the state’s Agriculture Best Management Practices Cost-Share Program to help farmers with those expenses.

Artist Jennet Inglis and Valley Conservation Council are teaming up to produce a three part series of fundraising and educational events that link the honoring of nature in fine art with scientific conservation practices.

How do you River? That’s the question at the center of a new campaign that launched today from the James River Association, the Virginia organization dedicated to promoting the protection and enjoyment of America’s Founding River.

Traditionally, conservation biologists have relied on field observation and sample and statistical analysis to help them understand the dynamics behind species loss.

Governor McAuliffe announces $1.3 million from USDA to Department of Forestry

Governor Terry McAuliffe announced that a Virginia Department of Forestry resource conservation project is among 110 high-impact projects nationwide set to receive more than $370 million through the USDA.

In Defense of Animals (IDA), an international animal protection organization, released today its list of the Ten Worst Zoos for Elephants for 2014.