Studying the effects of drying streams 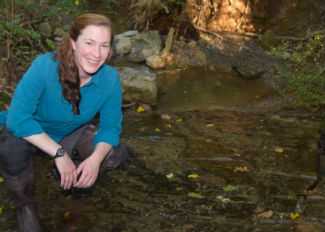 Meryl Mims, an assistant professor in the Department of Biological Sciences, studies the effects of drying streams.

Virginia Tech researcher, Meryl Mims, is the co-principal investigator on one of the first large-scale coordinated ecology research projects to study what happens to streams as they dry across the United States.

Mims, an assistant professor in the Department of  Biological Sciences in the College of Science, received a new grant from the MacroSystems Biology program of the National Science Foundation (NSF). The grant is budgeted for $3.04 million across five universities with $452,000 coming to the Mims lab at Virginia Tech.

The Mims Lab will examine macroinvertebrate, or bug, communities in 10 regions across the southern United States to make connections among climate and biological factors in intermittent, or not continuously flowing, streams, a little-studied area of freshwater ecology.

According to the NSF MacroSystems Biology program, “The ecological significance of intermittent streams, which are controlled by large-scale climate fluctuations and colonized by aquatic life under wet conditions, will likely grow as the global environment changes and human demand for water increases.”

“This research will give us new insight into the ecology of intermittent streams. We hope to understand how stream drying affects the function of stream ecosystems and the response of organisms. By looking at streams across the country, we can develop and test a large-scale framework to analyze environmental changes,” said Mims, affiliated faculty member of the Fralin Life Science Institute and Global Change Center.

Mims, a freshwater ecologist and conservation biologist, investigates how species’ traits and environmental attributes interact to influence community and the population structure of aquatic organisms.

Her lab’s research integrates the fields of population, community, and landscape ecology; the overarching goal of her research is to uncover, understand, and predict the differential responses of aquatic species to a changing landscape and climate.

“We use a suite of approaches, including population genetics, spatial and landscape ecology, traits-based inference, and multivariate statistical tools to look for patterns across species and patterns of response to environmental change,” said Mims.

For this grant, Mims is leading population genetic and genomic studies of 15 species across the study sites, as well as serving as the coordinator for field research at two of the 10 study regions, one in Northern Virginia and the other in the Smoky Mountains of Tennessee.

It will be the Mims lab’s first major focus on the research of macroinvertebrates, applying their genetic and genomic tools to understand population dynamics in intermittent streams. In addition to contributing to the overall goals of the project, work by the Mims lab will help advance the emerging field of comparative landscape genetics, which seeks to understand how the genetics of populations are influenced by the landscape and environment, and whether and how they differ among species.

“Population and landscape genetics inform our basic understanding of the movement, population size, and patterns of diversity of organisms – and how they are influenced by their environment. Both also help inform management and conservation of species,” said Mims.

University of Oklahoma professor Daniel C. Allen is the lead principal investigator of the study and conducts field research at sites in Oklahoma, Kansas, and Colorado.

“For decades, we have studied the ecology of streams that always have flowing water while largely ignoring those that do not, but only 40 percent of U.S. streams always flow. This large, new project will be one of the first to study both the 40 percent of U.S. streams that always flow as well as the 60 percent of streams that dry or stop flowing. In doing so, we hope to change the way we think about streams,” said Allen, a professor in the Department of Biology, University of Oklahoma College of Arts and Sciences.

The study will include field research that takes place at 100 sites across the United States in 10 different ecological regions. Most of these sites are currently included in the NSF-funded National Ecological Observatory Network, or NEON, that monitors water chemistry, invertebrates, fish, algae, and nutrients in their research as well (https://www.neonscience.org), providing an opportunity for the new stream project to integrate with NEON. The study sites will span coastal northern California to coastal Virginia in the north and southern Georgia to the Sonoran Desert in Arizona in the south.

“These projects leverage NSF investments in biological infrastructure to study how organisms and ecosystems respond to environmental changes from local to continental scales,” said Joanne Tornow, NSF acting assistant director for biological sciences. “Most of these projects use data from NEON to address long-standing questions that could not be addressed even five years ago without access to standardized, replicated, publicly available ecological data from ecosystems across North America.”

Researchers at all sites will follow NEON sampling protocols to produce NEON-compatible data. In each region, some of the stream study sites will always flow, while others will not, and the investigators will research the effects of stream drying on the different ecosystems in varied climates. Mims and her colleagues will focus on macroinvertebrates to study how drying influences what species survive, how population and communities (e.g., multiple species occurring at the same site) are connected, and how these effects may vary across the different climates of the southern half of the United States.

For more information about this project, contact Mims at mims@vt.edu.