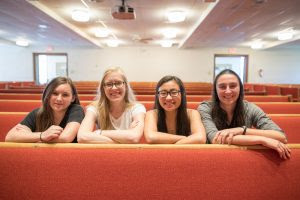 Rachel Helm (left), Evelina Kilimnik, Ada Zhang and Leah Wenger were among the interns and fellows supporting and participating in the 2019 Shenandoah Valley Bach Festival at Eastern Mennonite University.

While the 27th annual Shenandoah Valley Bach Festival at Eastern Mennonite University attracted professional musicians from all over the country, its 10 days of rehearsals and performances also provided something else: “A great learning experience” for the seven students who participated as interns and performing fellows, said executive director and violinist David McCormick.

The festival, which takes place under the artistic direction of Professor Emeritus Kenneth J. Nafziger, is devoted to promoting an appreciation for and understanding of the music of Bach and a featured composer, country, era or people. This year it explored the theme of creation and featured Franz Joseph Haydn’s “The Creation” and Darius Milhaud’s “La création du monde.”

But the interns weren’t just helping McCormick; they were also gaining a valuable inside look at the music business – “and from experience I can tell you that it’s just not possible to have a music career anymore without knowing your way around some business things,” he said.

Many concert goers may not be aware of “all the work” a festival requires, said Wenger, a senior psychology and music performance double major who along with fellow EMU student Branner also served as an SVBF intern during the spring semester. Theirs is a better informed perspective, though, having completed tasks that included “getting word out that this event is happening, and fundraising, and board meetings, and hiring musicians, and getting things printed and into folders and sent out to people,” she said.

Facilitating rehearsals, though, also meant they were being exposed to great music: “They got to hear the orchestra and world-class musicians every day for ten days,” McCormick said. “It’s pretty incredible for them to have that opportunity to hear chamber music and orchestral music all day long – as part of their jobs.”

Rehearsing alongside professional musicians for that concert was a decidedly unique opportunity, said Zhang, a third-time fellow and 2019 graduate of Eastern Mennonite High School.

“In a student orchestra, you have so many rehearsals, like every single week, but this shows us how a professional orchestra rehearses,” she said: “Everybody knows their music before they get to rehearsal. It’s very, very efficient.”

“Even from the very first rehearsal, you come in, you sit down, you open your music and you already have what you’re hearing on the soundtrack,” said violinist Kilimnik, an EMU sophomore and second-time fellow. “You’re already playing it. There is no in-between. Instead of the growth of music, it’s just a sudden happening of it.”

“And you’re listening to everybody else at the same time,” added Helm, a rising senior at the Shenandoah Valley Academy and first-time fellow. “It’s fun.”