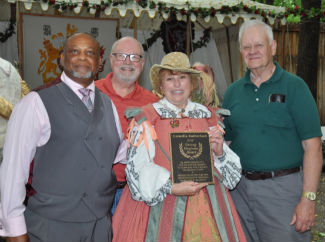 The Virginia, Maryland & Delaware Association of Electric Cooperatives has named Cornelia Rutherford as this year’s Unsung Virginian for her tireless efforts to preserve and grow the Virginia Renaissance Faire, a family-friendly event held at Lake Anna Winery over five weekends each spring.

The Unsung Virginian Award honors outstanding citizens for services rendered to the Commonwealth without
thought of personal gain.

Nearly 20 years ago, this Northern Virginia Electric Cooperative (NOVEC) member made the fateful decision to cash out her retirement account in order to save the Faire. Its predecessor, a commercial for-profit venture owned by the Renaissance Entertainment Corporation, shut its gates in 1999 and left actors without a place to perform.

Cornelia, known to her friends as “Cornie,” had been serving as assistant coordinator for the Kids Kingdom, a position that gave her an opportunity to positively influence children’s lives. She led the 2002 reopening of the Faire as an all-volunteer experience, focusing on history and hands-on education.

At first, the Faire was a traveling event, held in several counties across Virginia, and even branching out to St. Mary’s County, Md. and Lancaster, Pa. At each location, through talented performers and craftsmen, more attendees learned more about life during the English Renaissance and its relationship to the founding of British colonies such as Virginia.

A few years later, the Virginia Renaissance Faire incorporated as a 501c3 educational nonprofit run by a board of directors. Rutherford continued to recruit new volunteers, united by a love of interactive, historical entertainment.

Connie Teunis, a pre-season volunteer, Faire vendor and friend who nominated Rutherford for the award, recalls, “I was selling my baked goods at a charity craft show some years ago when a group of people in costume ran up to my stand and said, ‘We need you for the Virginia Renaissance Faire!’ ” She continued, “Cornie has given me the confidence to pursue my passion. With her encouragement, I’m developing my own cookbook for publication, including recipes I use for the Faire.”

In 2005, the Faire secured a semi-permanent site at Lake Anna Winery in Spotsylvania County. Able to provide a more complete experience, it quickly grew to host 20,000 visitors each season and gained a nationwide reputation.

Seeking to expand the Faire’s mission, Rutherford recently led formation of the Phoenix Event Alliance. This group of companies and individuals has begun fundraising to purchase the site for a permanent multi-use event park that will provide a “forever home” for the Faire and other like-minded groups.

“Cornie’s Faire family of volunteers includes young people with autism and other special needs, and one of the Alliance’s goals is to expand that outreach,” said Teunis. She explained that partnering with agencies such as Goodwill to offer training and therapy facilities will keep the event park busy during the week while providing useful job skills and internship experience.

As the leader of this new team of artisans, therapists, event managers, sport coaches and equestrian teachers, Rutherford has gained the respect of local community leaders. In her letter of support for the Unsung Virginian nomination, Spotsylvania County Tourism Manager Debbie Aylor wrote, “Cornelia has steadfastly stuck to ethical business practices, honorable interpersonal relationships, and hands-on commitment of personal time and resources to do the right things.”

As he presented Rutherford with the Unsung Virginian award, VMDAEC President & CEO Richard Johnstone stated, “Because of Virginians such as Cornelia, young people are being raised with a greater sense of history, as well as an appreciation and enjoyment of live performance, which risks becoming a lost art in this digital age.”

VMDAEC Board Chairman James Huffman added, “Ms. Rutherford embodies the 7th cooperative principle of ‘concern for community.’ Her impressive contributions to residents of the Commonwealth, and ambitious future goals, fully convey the purpose of our award.”