The $4.55 million package of local and state incentives seems a pretty price to pay, but in the current economic environment, the 41 jobs that will come with the expansion of the PGI facility in Waynesboro might just have extra value.

The jobs will pay an average of $18 an hour, 23 percent above the average hourly wage in Waynesboro, according to figures from the Virginia Employment Commission, which has wage earners bringing home $14.58 an hour.

Another benefit: protecting the 180 jobs already online at the plant located in the industrial park off Shenandoah Village Drive. 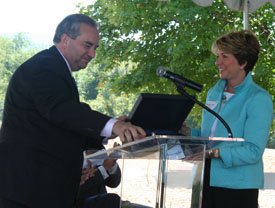 “You’re witnessing a lot of assets going into the ground out here that aren’t going to go away in six months. This is a long-term investment for us, and while it means 40 or 50 jobs today, what it really is doing is securing all of the other jobs that are in that factory,” PGI chief executive officer Ronee Hagen said Friday at a groundbreaking ceremony held to mark the beginning of work on the $65 million expansion, which will add a 90,000-square-foot addition to the existing 189,000-square-foot facility that will house a new state-of-the-art, custom-designed, spunmelt machine on grounds.

The machinery will produce fabrics with enhanced properties for medical and hygiene products such as diapers, and surgical gowns and drapes. The new line is expected to be operational in the second half of 2011.

Hagen praised local and state officials for their efforts related to the expansion. Virginia was competing with a community in the Charlotte, N.C., metro area near the PGI headquarters for the expansion.

“You had some stiff competition in terms of getting this investment and landing it here. As I told your competition, it wasn’t just about the financial incentives, which is what makes the headlines. It was much bigger and much broader than that. It was because you had a very good process here in Virginia and in the City of Waynesboro that brought all of the participants together as a team. That really swayed our decision-making,” Hagen said.

Lt. Gov. Bill Bolling, appointed by Gov. Bob McDonnell to serve as chief jobs officer in the new governor’s administration, was on hand for the groundbreaking. Bolling said the industrial expansion is important as an indicator that the American economy at its foundation “has to be an econony that continues to make things.”

Robin Sullenberger, the executive director of the Shenandoah Valley Partnership, an economic-development collaborative representing several Valley localities, told AugustaFreePress.com that the PGI news is typical for manufacturing projects these days that tend to be higher capital investment and lower numbers in terms of job creation.

“What we have to do is embrace this and not be concerned with the numbers, but be aggressively be prepared to take advantage of the high-quality jobs that are coming with the typical manufacturing-sector expansions that are currently taking place,” Sullenberger said.

Another indicator from the PGI news to Sullenberger – that the renewed focus in economic development in the Valley on nurturing existing business and industry is paying off.

“Three-fourths of the business growth in the region and in the state comes from the existing business community. We are seeing not only in Waynesboro and throughout the region that the local economic developers and the Partnership are all getting more actively engaged with the existing business community, and trying to create an environment that nurtures their continued growth and expansion here,” Sullenberger said.

Hitchin hopes to be able to use the PGI story to pitch to other companies the story of Waynesboro on the economic-development front.